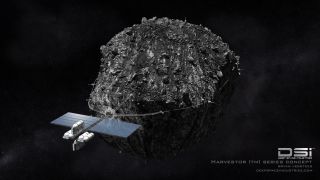 SANTA MONICA, Calif. — Tuesday mornings are usually pretty quiet at the tiny Santa Monica Municipal Airport, and doubly so at the Museum of Flying located there. But last Tuesday (Jan. 22), the main hall was abuzz with something unusual.

On a dais in front of a WWII fighter, Geoffrey Notkin, co-host of Science Channel’s "Meteorite Men," opened up a press conference by introducing the principals of the latest entry into the asteroid-mining business, a company called Deep Space Industries. The brainchild of private space veterans Rick Tumlinson and David Gump, among others, DSI is the second major player to jump into the celestial gold rush.

The company is moving along a path similar but not identical to that mapped out by Planetary Resources, the billionaire-backed firm unveiled last April. Planetary Resources was founded by Peter Diamandis of X-Prize fame and Eric Anderson, formerly of the space-tourism outfit Space Adventures.

Chairman Tumlinson laid out the plan at the press conference. He described a phased program of asteroid reconnaissance, exploration and utilization, carried out with predominantly existing technological know-how.

Starting with a fleet of small, unmanned spacecraft called Fireflies, the company will journey to nearby asteroids beginning in 2015 to assess their stores of water, hydrogen and other volatiles, as well as metals such as nickel that can be used in the fabrication of metal parts.

A later generation of spacecraft, known as Dragonflies, will return samples from the drifting bodies to Earth. More ambitious spacecraft called Harvestors will do the actual asteroid-mining work, perhaps beginning as early as 2020.

The upshot of this grand plan is to provide fuel, water and oxygen for in-space use, as well as metals for parts fabrication away from Earth's surface.

Since one of the biggest costs associated with venturing beyond Earth’s orbit is the launching of water and fuel for the trip, finding and processing it in space could make journeys to Mars and other far-flung destinations much cheaper, advocates say. And in-space manufacturing could help build human habitats, satellites and other spacecraft, again saving greatly on launch costs. [Gallery: Future Visions of Human Spaceflight]

To garner needed profits in the short term, DSI would sell fuel to the many operators of satellites currently in orbit around the Earth. When these satellite run out of maneuvering fuel, they must either be re-provisioned or abandoned. The new company plans to make refilling the fuel tanks on such satellites economically feasible, saving tens of millions of dollars per year for the owner-operators in the process.

Will DSI pull it off, or will the company join the ranks of the many other similar operations that have burned through small fortunes, only to be born, live a brief, struggling life stuck on Earth’s surface, and meet their demise never having flown higher than the occasional corporate jet to the next fund raiser?

DSI's founders certainly believe they can make it. After a lightly comical introduction by the resident celebrity Notkin, Tumlinson took the stage and delivered a rousing call to action.

So many people have lost belief in what we can do as a species, Tumlinson said. We seem to be heading into the future with "less hope… less [sic] things to dream about… less, less, less, less… this myth exists only in the minds of those who believe that this is it, that this one ball, this tiny rock, is all there is, that this is all we have. We at Deep Space Industries don’t believe that… we believe that we sit in a sea of resources that is so infinite that it’s hard to describe."

Tumlinson then turned over the presentation to a small panel of experts and board members. There was an asteroid-mining expert from Australia, a satellite engineer from aerospace giant Loral, the aforementioned David Gump as CEO and many others.

Each added his bit of the story, ranging from the technical feasibility of Deep Space's ambitions to the (planned) financial backing to descriptions of multiple revenue streams.

At times the meeting became refreshingly candid, as when Gump mentioned that there were multiple reasons for the press conference besides merely announcing the company's existence. Such reasons include, he said, "letting the investors know that we are here.”

It was noted that many people in the aerospace industry are of an age that regards both the Apollo program and "Star Trek" as prime motivators, and the former was called into view more than once. That call went something like this: let companies like SpaceX, Bigelow Aerospace and Deep Space Industries do the day-to-day work of routine spaceflight, and let NASA get back to their “Lewis-and-Clark function” of great exploration and daring accomplishments.

Deep Space's early mission plan is for wealthy partners to sponsor the initial efforts to reconnoiter some near-Earth asteroids as the small, unmanned spacecraft are developed, then sell commercial missions for $20 million, using clusters of three spacecraft to maximize chances for success.

Over time, the process would grow from exploration to resource acquisition to in-space processing of volatiles to in-space manufacturing of metal parts using the metals available on some asteroids and a 3D printer.

Only time will tell if Deep Space Industries can make it happen. Both Gump and Tumlinson have had mixed success in the private space sector in the past — working, for example, to privatize the Russian Mir space station (some initial success, but over the long haul, nyet) and producing the first TV commercial shot in orbit for tech retailer Radio Shack (Da!).

Flights are scheduled to begin as early as 2015, which doesn't give Deep Space Industries much time to move from computer animations to finished spacecraft. But this is, after all, the age of private industry in space, as evidenced by the successful flights of SpaceX’s Dragon capsule to the International Space Station and the nearly concluded test flights of Virgin Galactic’s suborbital spacecraft, among others.

DSI may join the ranks of the successful despite the challenges. Many of us here on the ground will be watching them — and Planetary Resources, and many other private spaceflight companies — with fingers crossed.