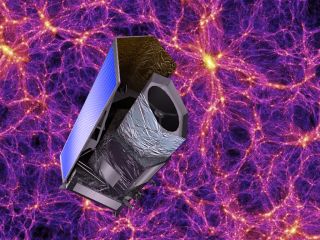 An artist's concept of the Euclid dark energy telescope in space. The European Space Agency and NASA will launch the spacecraft in 2020.
(Image: © ESA)

NASA has officially joined the European Space Agency's Euclid mission, a space telescope that will launch in 2020 to study the mysterious dark matter and dark energy pervading the universe.

NASA will contribute 16 infrared detectors and four spares for one of the Euclid telescope's two planned science instruments, agency officials announced today (Jan. 24). NASA has also nominated 40 new members for the Euclid Consortium, an international body of 1,000 scientists that will oversee the mission and its development.

"NASA is very proud to contribute to ESA's mission to understand one of the greatest science mysteries of our time," John Grunsfeld, associate administrator for NASA's Science Mission Directorate, said in a statement.

Astronomers think the "normal" matter we can see and touch makes up just 4 percent of the universe. The rest is comprised of dark matter and dark energy — strange stuff whose existence scientists infer from its influence on the 4 percent.

Dark energy is especially intriguing, since many researchers believe it to be the strange force responsible for the accelerating expansion of the universe. But just what it is remains a mystery.

The Euclid mission hopes to shine some light into the universe's darkest corners. After launching to a gravitationally stable spot called the sun-Earth Lagrange point 2, the 4,760-pound (2,160-kilogram) spacecraft will spend six years mapping and studying up to two billion galaxies throughout the universe.

Euclid's observations of these galaxies and their distribution should allow astronomers to better understand how the universe's acceleration has changed over time, revealing key insights about the nature of dark matter and dark energy, NASA officials said.

"ESA's Euclid mission is designed to probe one of the most fundamental questions in modern cosmology, and we welcome NASA's contribution to this important endeavor, the most recent in a long history of cooperation in space science between our two agencies," Alvaro Gimenez, ESA's Director of Science and Robotic Exploration, said in a statement.

The Euclid mission is slated to cost ESA 606 million euros, or $810 million at current exchange rates. NASA is considering its own dark-energy mission, the roughly $1.5 billion Wide-field Infrared Survey Telescope. If it eventually gets the official go-ahead, WFIRST is unlikely to launch before 2025, agency officials have said.