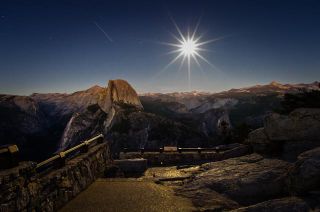 The International Space Station streaks across the sky as the full moon glows over Half Dome Yosemite National Park in this image. Scott McGuire captured this image on Oct. 28, 2012 from Glacier Point in Yosemite National Park, California. He used a Pentax K-5 camera and a Pentax 15mm Limited lens to capture the photo.
(Image: © Scott McGuire | Photography | www.ScottMcGuirePhotography.com)

The International Space Station shoots across the sky as the full moon shines over Half Dome at Yosemite National Park in this beautiful image.

Scott McGuire took this photo on Oct. 28, 2012 from Glacier Point in Yosemite National Park, Calif. He used a Pentax K-5 camera and a Pentax 15mm Limited lens to capture the photo.

"I was at Glacier Point to photograph the sunset and full moon, the International Space Station  was an unexpected bonus," McGuire wrote SPACE.com in an email.

Half Dome is a large peak rising 5,000 miles above Yosemite Valley. The steep, granite mountain is one of the most popular hikes in Yosemite National Park.

With a wingspan as long as a football field, the International Space Station is the largest human-made structure in space. The spacecraft is home to six astronauts representing the United States, Russia and Canada, and has the same living space as a five-bedroom home.

The space station can be easily seen from Earth by the unaided eye, if you know where and when to look. At times, it can even rival Venus, the brightest planet in the night sky, with its intensity. NASA recently launched a new Spot the Station website  that allows stargazers to sign up for text messages to learn when the orbiting laboratory will be flying over their location.

Editor's note: If you snap an amazing photo of Venus and the moon, or any other night sky object, that you'd like to share for a possible story or image gallery, send photos, comments and your name and location to managing editor Tariq Malik at spacephotos@space.com.