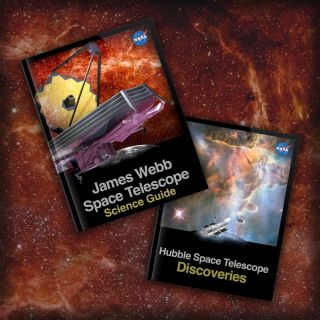 NASA has just released two free e-books about the Hubble Space Telescope and its not-yet-launched successor, with interactive features that let readers watch a galaxy collision or manipulate a telescope model between pages, agency officials say.

The Hubble Space Telescope launched in 1990 and has a mission lifetime through at least 2013. The space-based observatory has supplied some of the most dazzling visible-light images of distant cosmic objects, which are featured in "Hubble Space Telescope: Discoveries."

The James Webb Space Telescope, which will be almost three times the size of Hubble, has been designed to work best at infrared wavelengths in order to study the very distant universe, looking for the first stars and galaxies that ever emerged. The e-book, "Webb Space Telescope: Science Guide," explains the technology behind the mission, which is slated to launch in 2018.

"These new e-books from NASA will allow people to discover Hubble and Webb in a whole new way — both the science and the technology behind building them," Amber Straughn, an astrophysicist on the Webb telescope project at NASA's Goddard Space Flight Center in Greenbelt, Md., said in a statement. "They collect all of the amazing resources about these two observatories in an excellent product that I think people will really enjoy."

The e-books are available at the Apple iBookstore or can be downloaded as a PDF here: http://hubblesite.org/ibooks/