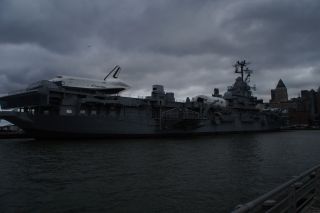 After a brief ribbon cutting ceremony with a group of school children from the Bronx, the museum and flight deck, housing the Enterprise, opened to the public after a six-week hiatus.

The space shuttle and museum on Manhattan's west side sustained damage during the late October hurricane, and while the museum isn't fully operational quite yet, the damage to the space shuttle was minimal, however dramatic looking, officials said.

The tip of Enterprise's vertical stabilizer, the back tail resembling a whale's dorsal fin, tore off when the inflatable pavilion fell down around it. However, it broke on a seam, making it a relatively simple repair, said Intrepid's president, Susan Marenoff-Zausner.

"Starting in January we're going to start building scaffolding around the shuttle for two purposes," Marenoff-Zausner said. "One is to fix the vertical stabilizer, a piece [of which] came off right at a seam so we're very fortunate that it's a very easy fix. But then, we're going to cover it with a fabric for protection in the winter."

Enterprise arrived at Intrepid this June, and first went on public display in July. [Spaceship Enterprise Barges Into Bayonne | Video]

The museum is in the process of crafting a new pavilion to house Enterprise that should be ready sometime in the spring. But until then, the Enterprise will be shielded from the elements with a fabric covering and other protective measures around the orbiter's windows and more exposed parts. Until the scaffolding is built next month, Enterprise will remain exposed and easily seen from the pier next to the Intrepid.

The Enterprise, which never flew to space, was used as a prototype to test the space shuttle design during glide flights in the 1970s. The orbiter has been exposed to rough weather many times before, but Marenoff-Zausner said that the shuttle is now a national artifact and needs to be kept in the best condition as possible. Although Marenoff-Zausner said she is confident that Enterprise is safe from any further inclement weather, she is worried that the shuttle's paint job could start chipping.

The pavilion and shuttle were reasonably well protected during Sandy, but the strength of the storm was so unexpected that even five days of preparation didn't prevent the museum from sustaining damage, officials said. Although the generators responsible for keeping the Enterprise pavilion inflated were raised two extra feet off the ground, the hurricane's 4-to-6-foot (1.2 to 1.8 meters) rush of floodwater still left them submerged. Once the transformers blew, the pavilion deflated, and part of the shuttle's vertical stabilizer detached.

"When the pavilion came down," Marenoff-Zausner said, "it acted as a protective shield over all the equipment so we were able to get in there literally the next day and start mobilizing and get all the equipment out."

And it was lucky that they did, she said. The next week, New York was hit with a snowstorm that compounded the issues already facing the city in the wake of the hurricane.

Most of the damage to the museum from Sandy was contained in the visitor's welcome center, which still isn't open. Six feet of water (1.8 meters) flooded the building and ruined the floors and merchandise in the gift shop.

Despite the damage, Marenoff-Zausner is confident that the Enterprise pavilion and the rest of the museum will be up and operational by 2013's Fleet Week — a week in early September when U.S. Marine and Navy corps dock in New York City.

Enterprise is one of four retired space shuttle orbiters to be installed in museums recently. Its sister spacecraft Discovery, Endeavour and Atlantis — NASA's three remaining space-flown orbiters — are at the Smithsonian's National Air and Space Museum outside of Washington, D.C., the California Science Center in Los Angeles, and the Kennedy Space Center Visitors Center in Cape Canaveral, Fla., respectively.