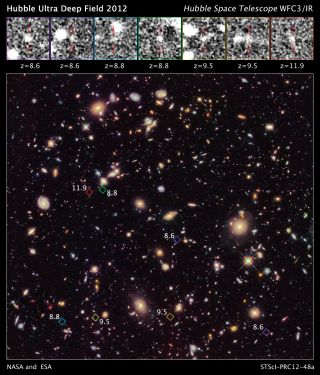 This new image of the Hubble Ultra Deep Field (HUDF) 2012 campaign reveals a previously unseen population of seven faraway galaxies, which are observed as they appeared in a period 350 million to 600 million years after the big bang.
(Image: © NASA, ESA, R. Ellis (Caltech), and the UDF 2012 Team )

Astronomers have spotted seven galaxies that existed just a few hundred million years after the universe's birth, including one that may be the oldest found to date.

The potential record-holding galaxy, known as UDFj-39546284, likely existed when the universe was just 380 million years old, researchers said, and may be the farthest galaxy ever seen. The other six distant galaxies all formed within 600 million years of the Big Bang, which created our universe 13.7 billion years ago.

UDFj-39546284 was detected previously, and researchers had thought it formed just 500 million years or so after the Big Bang. The new observations, made using NASA's Hubble Space Telescope, push its probable formation time back even further.

The seven galaxies constitute the first reliable census of the epoch from 400 million to 600 million years after the universe's birth, researchers said. This census detects a steady increase in galaxies over this period, suggesting that the formation of the first stars and galaxies — the so-called "cosmic dawn" — happened gradually rather than suddenly.

Ellis and his team pointed Hubble at a small patch of sky known as the Hubble Ultra Deep Field, which the telescope observed for many hours to build up enough light to spot extremely faint, distant objects. The researchers used Hubble's Wide Field Camera 3 to study the deep field in near-infrared wavelengths during August and September 2012.

The astronomers used special filters to measure the galaxies' redshifts — how much their light has been stretched by the expansion of space. From the redshifts, the researchers were able to calculate the distance to each galaxy, revealing their ages.

The results "reprensent our cosmic roots," said Harvard astronomer Abraham Loeb, who was not involved in the study. The new Hubble data "comes from the biggest archeological dig that we have of the universe."

The team pushed Hubble to its limits, and the telescope probably won't be able to see back in time any further, Ellis said. But NASA's James Webb Space Telescope, which is slated to launch in 2018, will dig even deeper into the universe's past.

"Hubble has, in a sense, set the stage for Webb," team member Anton Koekemoer, of the Space Telescope Science Institute in Baltimore, said in a statement. "Our work indicates there is a rich field of even earlier galaxies that Webb will be able to study."

The new study has been accepted for publication in The Astrophysical Journal Letters.