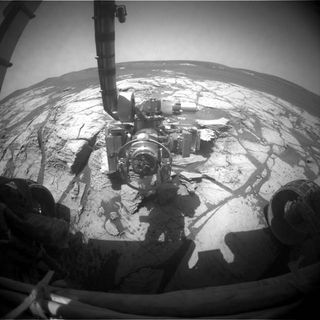 NASA's Mars rover Opportunity successfully unstowed its robotic arm on Dec. 13 for the first time since Nov. 25 after a shoulder joint motor glitch prevented deployment. The rover reaches toward a rock outcrop at Erebus Crater in this view from a front hazard camera.
(Image: © NASA/JPL/Cornell.)

NASA's Mars rover Opportunity has sucessfully reached out toward a Martian rock with its robotic arm, overcoming a motor glitch that prevented deployment last month.

Opportunity unstowed its instrument-laden robotic arm Tuesday, aiming the multi-jointedappendage straight ahead towards a rock outcrop jutting from a crater at itsMeridiani Planum landing site, the mission's project manager said.

"It wentfine...we successfully put an instrument on the rock," Jim Erickson, projectmanager for the Mars ExplorationRover mission at NASA's Jet Propulsion Laboratory (JPL), told SPACE.com."The team did a great job but we've got more work to do."

Opportunity'sroboticarm - which carries four instruments designed to photograph, brush, grindand determine the composition of Martian rocks - stalled in its stowed positionon Nov. 25, preventing active study of the nearby outcrop at its Erebus Craterlocation. A problematic shoulder joint motor, which swings the arm out from itsstowed position tucked under the rover, appeared to be the cause.

"We werefearful for a time that the motor may have failed permanently," said SteveSquyres, principal investigator for the rover mission at Cornell University,during a Dec. 12 discussion at the American Museum of Natural History in NewYork City. "If that were the case, we'd never be able to use the arm again."

But on Dec.8, rover engineers managed to move thearm slightly. The motor glitch appears to be the result of a broken wire in oneof nine windings - or coils - inside the shoulder joint, Erickson said. By applyinga higher voltage than normal to the windings, the joint moved, he added.

"We'redeveloping a mode for keeping the arm out in front," Erickson said, adding thatengineers are now studying various positions in which to stow the arm andensure its continued use as a science tool. "We'll essentially stow it now byputting the instrument pack up over the rover's deck."

Ericksonsaid more analysis and arm motor tests are planned in order to determine thebest configuration for the arm during drives.

"I used tothink that dust on our solar arrays was going to be the limit for these rovers,I don't think that anymore," Squyres said. "I think, instead, that something isgoing to break. We have a lot of moving parts and electrical parts on theserovers."

Squyresadded that the success of Spirit and Opportunity has changed the way he looksat Mars.

"[Beforelaunch] it just seemed impossibly far away, it seemed unreachable," Squyressaid of the red planet. "Tonight, I go out knowing our rovers have been there awhole Martian year...it's a much more familiar planet. We know the place."