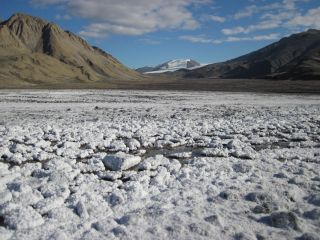 So-called "cold springs" in Canada's high arctic may be similar to active springs that could potentially exist on Mars, scientists studying the springs suggest.

Researchers probed the makeup of several salt-laden pools in the arctic permafrost, similar to salt environments that spacecraft orbiting Mars have spotted on the Red Planet. The arctic pools contain microbial life, and could give primitive life a haven if they exist on Mars, researchers say.

"On Mars, we don’t know if there are any springs, but the environment is essentially completely permafrost. So these springs are potential analogs for present-day Mars," said Gordon Osinski, a University of Western Ontario assistant professor who has expertise in planetary geology.

The work is led by Melissa Battler, a Ph.D. candidate at the university, with Osinski supervising. The research will be detailed in two studies to be published in the journal Icarus, and is being discussed at the Canadian Space Society's annual meeting this week in London, Ontario. [The Search for Water on Mars (Photos)]

A flavor of Mars

Battler did the first geological and mineralogical measurements of three springs in Axel Heiberg, an island high in the Nunavut territory.

To everyone's surprise, each spring had a different type of mineral in it; carbonate calcite, and the salts gypsum and sodium sulphate, were the variations that were found. Researchers are now trying to figure out why the composition varies.

Active springs haven't yet been found on Mars, the researchers noted. Even high-definition spacecraft peering at the Red Planet today, like NASA's Mars Reconnaissance Orbiter, cannot see features of a meter or less in size — the size of a typical spring in the Arctic.

But if the springs exist on Mars, the researchers said they could support microbial life. Because salt keeps the water warm in freezing temperatures, researchers found microbes in the Arctic springs even though the surrounding ground is permafrost.

In the Northwest Territories, Battler also analyzed a spring containing jarosite, a mineral that forms in water. This mineral is particularly exciting to researchers because on Mars, the Spirit and Opportunity rovers both found it as well.

"We are confident that a Martian jarosite patch could form under conditions not much warmer nor more humid than those present on Mars today," Battler wrote in an email to SPACE.com.

The Arctic sites where these springs appear used to be tropical oceans. When the climate cooled and the oceans evaporated, large deposits of salt were left behind.

The salt formed hundreds of millions of years ago and lay beneath today's springs, which formed when groundwater (it's not known exactly where it came from) brought water to the surface. New salts formed from the old ones in the groundwater.

Mars had water streambeds in its ancient past and could have formed its salt deposits through a similar process.

NASAand other groups are eagerly exploring Canada's north because they believe the permafrost and harsh conditions found there are similar to what is experienced on Mars.

The Canadian Space Society will host another Arctic session from McGill University. The researchers examined jarosite and other salt types in lake sediments on Devon Island. They suggested that signatures of life could be left behind on Mars in some salt environments.