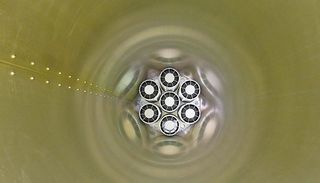 NASA scientists launched a small telescope into space this month to study faint flares on the sun. But there's a twist: The mission took less time than it takes to hard-boil an egg.

The solar telescope flew atop suborbital sounding rocket on Nov. 2 during the short 6-minute flight, which  launched from the White Sands Missile Range in New Mexico aboard. The rocket, which is designed to fly experiments into space but not orbit the Earth, carried the Focusing Optics X-ray Solar Imager (or FOXSI) to study small changes in the sun's weather.

Though short-lived, the 200-mile (321 kilometers) rocket flight could provide new data on mysterious solar nanoflares — tiny, sudden bursts of energy that constantly erupt on the sun's surface. As their name suggests, nanoflares are much smaller and thus harder to see than the massive solar flares that get attention for wreaking havoc on Earth's electronics and communications networks.

"Most people like to look at the really big flares. They're complicated and do crazy things," Steven Christe, project scientist for FOXSI at NASA's Goddard Space Flight Center in Greenbelt, Md., said in a statement a day before launch. [Amazing Solar Flare Photos]

FOXSI, however, was geared to check out at very faint events using a next-generation X-ray telescope with extra sensitive optics. During the six minutes of intense data gathering, the telescope was to focus on an active region on the sun with big, dancing solar flares before fixing on a quieter region to glimpse an unobstructed patch of smaller flares, NASA said.

Scientists at the space agency hope the mission will shed light on the makeup of nanoflares and their relation to their bigger, more boisterous counterparts.

"There are two basic possibilities," said Christe. "One is that small flares are similar to large flares. But then we'd have to explain why they appear at a different rate and in different places than the big ones. So we need to determine whether these small events are really happening all the time, all over the sun."

The other possibility, Christe said, is that nanoflares are fundamentally different than large flares, which would be "extremely interesting" and would suggest a difference in the physics of the two types of flares.

Data gathered by FOXSI also might help explain how the sun's atmosphere gets so much hotter than the surface.

"If you think of a stove, the surface of the stove is hotter, and the air gets cooler as you move farther away," Säm Krucker, the principal investigator for FOXSI, explained in a statement. "But with the sun, something else is happening to make the atmosphere 1,000 times hotter than the surface."