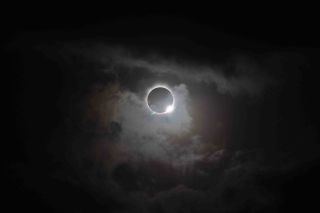 A total solar eclipse was visible from the northern tip of Australia on Nov. 13, 2012 at 3:35 EST. The light halo visible around the edges of the moon is the sun's atmosphere, the corona.
(Image: © Courtesy of Romeo Durscher/NASA Goddard Space Flight Center)

The moon blocked out the sun in a total solar eclipse today, briefly turning dawn back into night over parts of northern Australia and the southern Pacific Ocean.

The total solar eclipse began just after sunrise local time Wednesday (Nov. 14) in northern Australia, thrilling nearly 50,000 spectators who had flocked to the tropical city of Cairns to witness the event. It was the first total solar eclipse in Australia in a decade and the last eclipse of its kind that humans will see until 2015.

Because of time zone differences, it was still Tuesday afternoon (Nov. 13) in the United States during the celestial event. The totality phase of the eclipse — the point at which the moon completely blocks the sun — began at 3:35 p.m. EST (2035 GMT) over the Arnhem Land region in Australia's Northern Territory.

The moon's shadow swept southeast from there, crossing the Gulf of Carpentaria into the state of Queensland before heading out into the vast Pacific Ocean, where few could witness it. [Total Solar Eclipse of 2012 in Photos]

Solar eclipses occur when the moon lines up with the sun in the sky, blotting out the solar disk from a viewer's perspective on Earth. There are three main categories: total, partial and annular (in which the outer edge of the sun shines like a ring around the moon in the sky).

The last total solar eclipse as viewed from Earth took place in July 2010, and the next one won't occur until March 2015.

From start to finish, the "total" phase of the solar eclipse lasted about three hours. At Cairns on the northeast Queensland coast, enthusiastic observers saw the moon cover the sun's disk completely for two minutes, beginning at 3:39 p.m. EST (2039 GMT).

Several U.S science teams and eclipse webcast efforts made the journey to Australia to capture the event.

American astronomer Bob Berman, who watched the eclipse from Port Douglas, Australia, for a webcast by the U.S.-based Slooh Space Camera website, said witnessing a total solar eclipse in person was a "life-changing experience." Observers at his site waited nervously as clouds threatened to obscure the sun during the eclipse, but the skies ultimately cleared in time for some amazing views of the moon in front of the sun.

NASA spokesman Josh Byerly told SPACE.com that there was a tiny window in which the moon's shadow on Earth might be visible from the International Space Station today, but the outpost's six-person crew was scheduled to be sleeping at that time.

While the next total solar eclipse won't occur until 2015, a so-called "hybrid" eclipse — which shifts between total and annular at different points on the globe — will come to parts of the Atlantic and central Africa in November 2013.

The eclipse isn't the only celestial treat for stargazers in November. The annual Leonid meteor shower will peak just after midnight on Saturday (Nov. 17), and then flare up again on Tuesday (Nov. 20).

Editor's note: If you snapped an amazing photo of today's total solar eclipse from Australia — or any other night sky object — that you'd like to share for a possible story or image gallery, send images, comments and location information to managing editor Tariq Malik at tmalik@space.com.