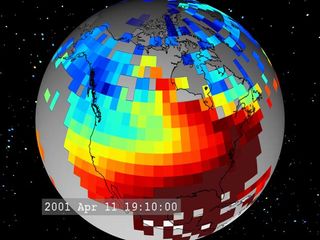 New insight into giant space weather systems that sometimes buffet Earth is expected to help scientists better predict when radio and other terrestrial communication systems will be impeded.

The electrified storms result when Earth's upper atmosphere is energized by clouds of charged particles kicked up by solar storms.

Researchers at NASA and the National Science Foundation found a way to combine ground and space observations to create an unprecedented view of the upper-atmosphere disturbances. They resemble weather cold fronts down on the surface, the researchers said.

"People knew there was a space storm that must have disrupted their system, but they had no idea why," said Tony Mannucci of NASA's Jet Propulsion Laboratory. "Now we know it's not just chaos; there is cause and effect. We are beginning to put together the full picture, which will ultimately let us predict space storms."

The researchers have linked movement of the plumes to processes that release plasma into space.

"Discovering this link is like discovering the movement of cold fronts is responsible for sudden thunderstorms," said Jerry Goldstein of the Southwest Research Institute in San Antonio.

The plumes cause GPS position errors by time delaying the propagation of GPS signals. And the turbulence they generate causes receivers to lose the signal through an effect known as scintillation, similar to the apparent twinkling of stars caused by atmospheric turbulence.

The research team actually used the GPS disturbances to build their new model of how the storms behave.

"We also know these disturbances occur most often between noon and dusk, and between mid to high latitudes, due to the global structure of the electric and magnetic fields during space storms," said Anthea Coster of the Haystack Observatory. "Ground and space based, and in situ measurements are allowing scientists to understand the ionosphere-thermosphere-magnetosphere as a coupled system."