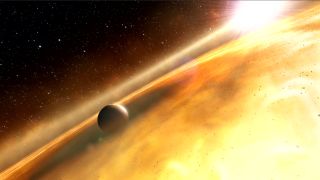 Halloween brings out the zombies and vampires here on Earth, but these and other monsters are a constant presence in the heavens above our heads.

Space is full of freaky and freakish phenomena, from stars that suck the life out of their stellar companions to gigantic black holes billions of times more massive than our sun. In honor of the Halloween season, here's a brief rundown of the spookiest things in space.

Many astronomers had heaped dirt on the huge alien planet Fomalhaut b, but it apparently lives again.

Back in 2008, astronomers using NASA's Hubble Space Telescope announced the discovery of an enormous planet circling the bright star Fomalhaut, which lies just 25 light-years from Earth. Other researchers subsequently cast doubt on Fomalhaut b, saying the discovery team had actually just imaged a giant dust cloud. [The Strangest Alien Planets]

But a new analysis of Hubble observations from 2004 and 2006, to be published soon in the Astrophysical Journal Letters, detects the planet all over again. Other researchers are scrutinizing the Fomalhaut system, too, so this zombie may be buried once again before all is said and done.

Some stars do Fomalhaut b one better, literally coming back to life in violent and dramatic fashion.

Astronomers know these zombie stars as Type Ia supernovas — huge and powerful explosions that send star innards streaking out into the universe.

Type Ia supernovas explode from binary systems that contain at least one white dwarf — a tiny, super-dense star that has ceased undergoing nuclear fusion reactions. White dwarfs are "dead," but they don't have to stay that way in a binary system.

They can roar back to life, albeit briefly, in a gigantic supernova explosion by sucking material from their companion stars, or by merging with them.

Just like vampires of fiction, some stars manage to stay young by sucking the life force from hapless victims.

These vampire stars are known as "blue stragglers," and they act much younger than the ancient neighbors with which they formed. They burn much hotter, for example, and appear much bluer. Scientists think they manage this feat by sucking hydrogen fuel away from companion stars.

Black holes seem like the stuff of science fiction — objects of extreme density whose gravity is so strong that not even light can escape if it draws near enough.

But they're very real, and quite common throughout the universe. In fact, astronomers think that supermassive black holes lie at the heart of most, if not all, galaxies, including our own Milky Way.

"Supermassive" is an apt descriptor, for these objects are mind-bogglingly gigantic. Scientists recently discovered two black holes that each contain about as much mass as 10 billion suns.

The unfathomable blackness of space

If you're scared of the dark, deep space is not the place for you. It is a place of extreme blackness, far from the comforting lights of home.

Space is black because it's incredibly empty, scientists say. Though trillions of stars are scattered throughout the cosmos, there just aren't many molecules in the huge intervening distances for their light to bounce and scatter off.

The heavens are populated by cackling witches, glowing skulls and all-seeing eyes — in fact, pretty much any ghoul or monster you can imagine. [The Spookiest Nebulas in Space]

We see these shapes in diffuse collections of glowing gas and dust called nebulas, which are scattered throughout the universe. Spotting space tarantulas and witches' brooms is an example of pareidolia, a phenomenon in which the human brain recognizes shapes in random images.

The above phenomena may be spooky in an abstract or silly way, but they pose no threat to humanity. That cannot be said for big asteroids that zoom close to Earth.

A space rock at least 0.6 miles (1 kilometer) wide has the potential to wipe out civilization if it strikes our planet, experts say. And even asteroids that measure just 130 feet (40 meters) across can inflict serious damage on a local scale if they strike near a populated area.

Asteroid impacts are a fact of life here on Earth; a 6-mile-wide (10 km) space rock is probably what wiped out the dinosaurs 65 million years ago. Luckily for us, however, scientists are scanning the heavens for dangerous space rocks, and there are ways to deflect asteroids that may have Earth's name on them — if we have enough lead time.

The sun gives us life, but our star is not exactly benign. It unleashes huge storms from time to time, with potentially devastating impacts on radio communications, satellite navigation and power grids here on Earth.

Such solar outbursts have been on the rise lately, as the sun has settled into a particularly active phase of its 11-year cycle. Researchers expect solar activity to peak in 2013.