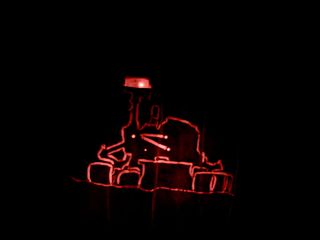 Liz Warren's 2012 "space-o'-lantern" features Curiosity rover. She writes: "Bobak Ferdowski is going to be in Houston late next week and I think it would be fun to give him the pumpkin!"
(Image: © Liz Warren)

For this year's "space-o'-lantern," veteran pumpkin carver and NASA employee Liz Warren honored what may be the biggest space event of the year: the Curiosity Mars rover.

Curiosity landed on Mars in August, and for Halloween this year Warren carved a silhouette of the rover on a pumpkin. Warren has a longstanding tradition of carving space-themed pumpkins, which have usually honored space shuttle and International Space Station missions in the past.

"I carved a Curiosity design this year because in August of this year, that mission truly captured the imagination of the world in bold NASA fashion," Warren told SPACE.com. "They dared a mighty thing and they succeeded."

Warren, an employee at NASA's Johnson Space Center in Houston, says Halloween is her favorite holiday, and has used the occasion to carve likenesses of space mission patches onto gourds in recent years. [Gallery: Warren's Space-y Halloween Pumpkins]

"The idea to carve a Curiosity pumpkin actually came from an astronaut familiar with my previous space-o'-lanterns," Warren said. "It's breaking a little with my tradition of featuring human spaceflight, but NASA's missions are broad and so I feel good about broadening the topic of my pumpkins."

Curiosity is a $2.5 billion car-size rover that's beginning a two-year exploration of Mars' Gale Crater. The rover's nail-biting landing this summer, which went off without a hitch, captivated the public and marked a major success for NASA. One element of Curiosity fever centered on charismatic NASA flight controller Bobak Ferdowsi, whose stars-and-stripes Mohawk hairdo garnered overnight fame.

"Bobak Ferdowsi is going to be in Houston late next week and I think it would be fun to give him the pumpkin!" Warren said.

For any other would-be space-o'-lantern carvers, Warren has outlined some tips: