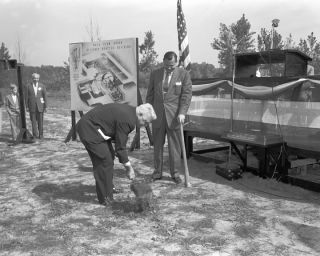 In this historical photo from the U.S. space agency, Congressman Baumhart watched as Lewis Laboratory Director Dr. Edward Sharpe dug the first shovel of dirt at the September 1956 groundbreaking ceremony for the Plum Brook Reactor Facility. The silver pick and shovel are the ones used for the 1941 groundbreaking of the NACA Lewis Laboratory in Cleveland, Ohio.