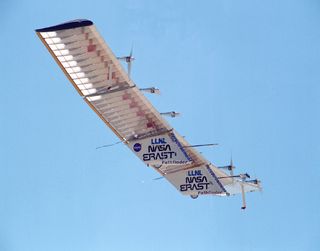 In this historical photo from the U.S. space agency, the Pathfinder research aircraft's wing structure was clearly defined as it soared under a clear blue sky during a test flight July 27, 1995, from Dryden Flight Research Center, Edwards, California. The center section and outer wing panels of the aircraft had ribs constructed of thin plastic foam, while the ribs in the inner wing panels are fabricated from lightweight composite material.

Developed by AeroVironment, Inc., the Pathfinder was one of several unmanned aircraft being evaluated under NASA's Environmental Research Aircraft and Sensor Technology (ERAST) program. Pathfinder was a lightweight, solar-powered, remotely piloted flying wing aircraft used to demonstrate the use of solar power for long- duration, high-altitude flight. Its name denotes its mission as the "Pathfinder" or first in a series of solar-powered aircraft that will be able to remain airborne for weeks or months on scientific sampling and imaging missions.

Solar arrays covered most of the upper wing surface of the Pathfinder aircraft. These arrays provided up to 8,000 watts of power at high noon on a clear summer day. That power fed the aircraft's six electric motors as well as its avionics, communications, and other electrical systems. Pathfinder also had a backup battery system that could provide power for two to five hours, allowing for limited-duration flight after dark.

Pathfinder flew at airspeeds of only 15 to 20 mph. Pitch control was maintained by using tiny elevators on the trailing edge of the wing while turns and yaw control were accomplished by slowing down or speeding up the motors on the outboard sections of the wing.

On September 11, 1995, Pathfinder set a new altitude record for solar- powered aircraft of 50,567 feet above Edwards Air Force Base, California, on a 12-hour flight. On July 7, 1997, it set another, unofficial record of 71,500 feet at the Pacific Missile Range Facility, Kauai, Hawaii. In 1998, Pathfinder was modified into the longer-winged Pathfinder Plus configuration.