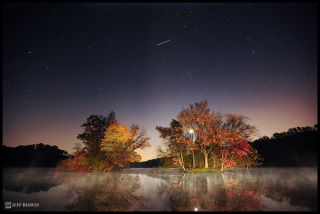 Editor's update for May 5, 2014: It's almost time for this new meteor shower. See how Comet 209P/LINEAR may spark a meteor storm here: New Meteor Shower Could Upgrade to 'Storm'

While the Orionid meteor shower from Halley's Comet has our full attention this weekend, recent calculations made by meteor experts suggest there's a far-greater celestial fireworks display coming to in 2014.

In May 2014 there appears to be a reasonably good chance that a new, and very significant meteor shower, will take place. At the moment, conservative forecasts suggest anywhere from 100 to 400 meteors per hour may be seen, but the actual rate could peak much higher and potentially reach "meteor storm" levels (1,000 per hour!).

The progenitor of this possible display is comet 209P/LINEAR, a periodic comet discovered on Feb. 3, 2004, by the Lincoln Near-Earth Asteroid Research project (LINEAR) using a 1-meter (39 inches) reflector telescope. The comet was given the permanent number 209P on Dec. 12, 2008.

As comet’s go, 209P/LINEAR is small and intrinsically dim. It completes one trip around of the sun in about five years. The comet's aphelion distance (farthest point from the sun) extends out near the orbit of Jupiter and its orbit has been perturbed several times by the giant planet's gravitational pull over the past 200 years. [Photos: Orionid Meteor Shower of 2012]

Meteor experts Esko Lyytinen of Finland and Peter Jenniskens at NASA Ames Research Center were the first to announce that the Earth was on a collision course with a number of dusty debris trails shed by comet LINEAR which would cause an outburst of meteor activity. Their findings have since been independently confirmed by two meteor experts.

Jeremie Vaubaillon, of The Institut de Mecanique Celeste et de Calcul des Ephemerides in France, notes that: "So far,given the observations, we estimate a ZHR (zenithal hourly rate) of 100/hr to 400/hr, which is an excellent outburst!  But this shower can become an exceptional one. Indeed, given the current orbit of the comet, all the trails ejected between 1803 and 1924 do fall in the Earth’s path in May 2014!  As a consequence, this shower might as well be a storm."

You can see Vaubaillon's plot of Earth's path through the meteor shower stream here. The plot shows the Earth passing through a dense trail of debris on May 24, 2014.

Another reputable meteor scientist, Mikhail Maslov of Russia, has made a "very cautious" estimate for a ZHR of 100/hr, but with the disclaimer: "It is difficult to estimate expected intensity of the outburst due to the lack of past observed cases of activity from the given comet meteor shower, as well as due to very small size of the comet itself and unknown level of its past activity … and it is very possible that real activity will turn to be much higher. Storm levels are also far from being excluded."

The radiant for this impending meteor shower is in the northern circumpolar constellation of Camelopardalis and the predicted date is May 24, 2014, at around 3:30 a.m. EDT (0730 GMT/UT). That means that the United States and Southern Canada will be in the best position to see whatever activity occurs, since it will be taking place in a dark sky between midnight and dawn.

The moon will be a waning crescent, just four days from its dark "new" phase, and will be of little or no hindrance for prospective observers. As we get closer to May 2014, SPACE.com will provide more detailed information about this exciting and potentially spectacular event, so stay tuned!

But if you can't wait until 2014 for a meteor display, this weekend's Orionid meteor shower promises to offer dozens of "shooting stars" for observers with clear, dark skies. The Orionids occur each year in October when the Earth passes through a stream of dust from the famed Halley's Comet.

The Orionid meteor shower appears to radiate out of the constellation Orion, hence its name, which is currently at its highest in the night sky in the predawn hours. Look for the constellation in the southern sky late at night.

The Orionid meteor shower will peak before sunrise on Sunday (Oct. 21), but should still be an impressive show late Saturday night (Oct. 20). The peak hours to see the Orionids is between 1 a.m. and 2 a.m. local time on Sunday.

Editor's note: If you snap an amazing photo of the 2012 Orionid meteor shower and want to share it with SPACE.com, send photos, comments and location info to SPACE.com managing editor Tariq Malik at: tmalik@space.com.