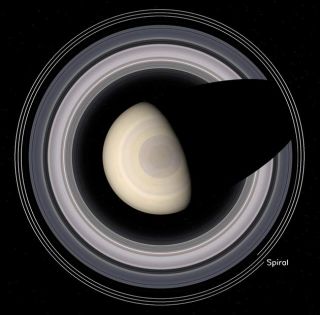 Ever since Voyager 1 returned detailed images of Saturn's F ring back in 1980, astronomers have struggled to understand its bizarre features.

The F ring, an outer thin wisp of icy material orbiting the giant planet, was discovered in 1979. It's been described as having clumps, strands and braids by various research groups.

An animation released in December showed the features, described as kinks, moving through time.

Turns out none of these descriptions was right, according to a new study using data and images from NASA's Cassini spacecraft and led by Sebastien Charnoz at the University of Paris.

"These strands, initially interpreted as concentric ring segments, are in fact connected and form a single one-arm trailing spiral winding at least three times around Saturn," Charnoz and colleagues write in the Nov. 25 issue of the journal Science.

The concept is best explained in an artist's conception.

Charnoz team made computer simulations to explore the spiral's origin. The new explanation raises more questions than it answers.

"The newly reported spiral is in a class by itself," says Mark Showalter, a SETI Institute researcher who wrote an analysis of the discovery for Science.

And it is changing rapidly. The spiral wound itself tighter between November 2004 and May 2005, the Cassini observations show. It will continue to tighten until the strands blend into a more uniform feature, Showalter said.

Prometheus and Pandora, near the F ring, have long been seen as playing a shepherding role, keeping ring particles together and tugging out the curious features. But their role is likely more disruptive than shepherding, Showalter now says.

Charnoz and colleagues say a recently discovered small moon catalogued as S/2004 S6 is involved. This moonlet -- or it may be just a tight clump of material -- can intersect the F ring at high speeds.

But none of these objects fully explains the F ring.

Showalter speculates that some other unknown large object may have collided with the F ring. The moonlet S/2004 S6 may be a leftover of that collision, he figures.

Saturn's rings were originally spotted by Galileo shortly after the invention of the telescope. The astronomer Domenico Cassini discovered the Cassini division in Saturn's rings in the 17th Century.