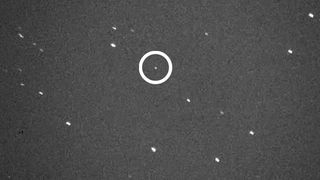 An asteroid the size of a house will buzz Earth today (Oct. 12) but poses no risk of hitting our planet, scientists say.

The asteroid 2012 TC4 will pass Earth at a range of just 59,000 miles (95,000 kilometers) —about one-fourth the distance to the moon — when it makes its closest point today, NASA scientists said. The asteroid was discovered by astronomers on Oct. 4 and is about 56 feet (17 meters) across.

The asteroid is large enough to be seen by backyard astronomers using a small telescope, the night sky events website Spaceweather.com has reported.

NASA scientists and astronomers regularly watch the skies for potentially dangerous asteroids that could pose and impact threat to Earth. In fact, by a fluke of timing, a group of asteroid hunters announced Thursday (Oct. 11) that it is on track for a 2017 launch of a private space telescope dedicated to seeking out potentially dangerous space rocks.

Officials with the B16 Foundation said their plan to launch the Sentinel Space Telescope to scan for near-Earth asteroids has passed a major review milestone. The new space telescope is designed to search for asteroids from an observation spot near the orbit of Venus.

In September 2011, NASA announced that its surveys had found about 90 percent of the largest asteroids that could post a threat – space rocks the size of a mountain or bigger.

Asteroid 2012 TC4 is too small to pose a risk to Earth. Past estimates by astronomers said that an asteroid about 460 feet wide (140 meters) would cause widespread damage on the planet.

If you snap a photo of asteroid 2012 TC4 in the night sky using a telescope and would like to share it with SPACE.com, send images, comments and location info to managing editor Tariq Malik at: tmalik@space.com.