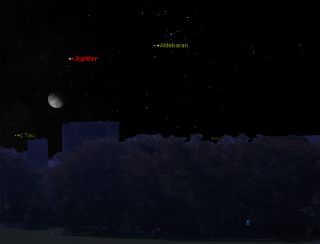 This sky chart shows the moon, the planet Jupiter and the bright star Aldebaran visible from the Northern Hemisphere on Oct. 4, 2012.
(Image: © Starry Night)

Check out the east-northeast sky after about 11 p.m. local time late Thursday and Friday evening (Oct. 4 and 5) for a changing celestial array involving the moon, a bright planet and a bright star, weather permitting.

The planet in question is Jupiter, usually the second brightest planet next to Venus. At a dazzling magnitude of -2.6 on the astronomers' brightness scale (the lower the number, the brighter the object), Jupiter shines three times brighter than Sirius, the brightest star. Whenever it's above the horizon, Jupiter, the solar system's biggest planet at 88,800 miles (143,000 kilometers) in diameter — always attracts immediate attention; to the eye it resembles a brilliant silvery white, non-twinkling "star."

Currently, Jupiter is 419 million miles (674 million km) from Earth. Although primarily an after-midnight sight right now, Jupiter is rising an average of just over 4 minutes earlier each night.  By Dec. 3 it will arrive at opposition and be visible all night from sunrise to sunset.

Lately, Jupiter can be seen in the constellation of Taurus, the Bull. It's positioned between the Bull's horns, and not far from the Bull's V-shape face which is composed of the stars of the Hyades star cluster. [Gallery: October 2012 Night Sky Guide (Sky Maps)]

One star in the V stands out far more than the others. That's Aldebaran, marking the Bull's angry orange-red eye. This star seems like it's a member of the Hyades, but in reality, it's only an innocent bystander; it's lined up almost perfectly with the other neighboring stars to fill out the V-shaped pattern, but it's actually much closer to the Earth at a distance of 65 light-years, compared to the Hyades, which is more than double that distance at 153 light-years away.

The moon is currently on the wane, with full phase having occurred this past weekend; last quarter (or half phase) will come early on Monday (Oct. 8). So a gibbous moon will be interacting with Jupiter and Aldebaran late this Thursday and Friday nights.

Late Thursday night, the moon will form a right triangle with Aldebaran and Jupiter. The moon will stand about 5 degrees above Aldebaran, which in turn sits about 7 degrees to the right of Jupiter. Your clenched fist held at arm's length measures roughly 10 degrees.

Late on Friday night, the moon will have shifted noticeably past Jupiter, and will stand about 5 degrees to Jupiter's lower left — while at the same time the moon will be about 10 degrees ("one fist") to the left of Aldebaran.

In addition to our own moon, there are four other moons that you might want to look at, namely the famous Galilean Satellites, which were first seen by Galileo with his crude telescope in 1610.

These satellites of Jupiter are fun to watch as they change their position relative to their host planet from hour to hour and night to night. They can be glimpsed through 7-power binoculars (if you hold them steady) or better yet, a small telescope.

On both Thursday and Friday nights you can see all four moons — two on either side of Jupiter.  On Thursday night, on one side, you'll see Europa and Ganymede, while on the side, spaced farther apart are Io and Callisto. On Friday night, Ganymede and Io will be relatively close to each other, while on the other side near to Jupiter will be Europa, with Callisto farther out from "Big Jupe."