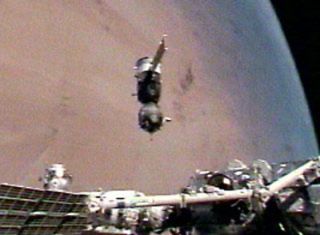 Twoastronauts working aboard the International Space Station (ISS) took a shorttrip early Friday during a relocation flight aboard their Russian-built Soyuzspacecraft.

Tokarevcommanded the 19-minute Soyuz flight, which began at the Pirs dockingcompartment at 3:46 a.m. EST (0846 GMT) while the ISS flew 220 miles (354kilometers) over the South Atlantic Ocean off the coast of South America.

"Okay, we'removing along," Tokarev said as the Soyuz pulled away from the ISS.

The twoastronauts moved the Soyuz spacecraft about 45 feet (13 meters) during theflight and docked the spacecraft at a berth outside the Russian-built Zaryacontrol module at 4:05 a.m. EST (0905 GMT) while passing over Northern Africa'sSahara Desert.

Both theISS and Soyuz vehicles flew about 5,500 miles (8,851 kilometers) across Earthduring the short flight.

The Soyuzrelocation clears the Pirs docking compartment for the Expedition 12 crew's secondspacewalk, during which McArthur and Tokarev will don Russian Orlan spacesuitsto work outside the ISS.

Originallyset for Dec. 7, the spacewalk will likely be rescheduled to late January orearly February to ease a rather packed month of work for McArthur and Tokarevin December, NASA officials said. The two astronauts are set to discard theunmanned cargo ship Progress19 from its berth at the aft end of the station's Zvezda service module onDec. 20 to make way for its replacement - Progress 20 - set to dock there onDec. 23, they added.

Russia'sFederal Space Agency, which Tokarev represents aboard the ISS, will launch theProgress 20 supply ship from Baikonur Cosmodrome in Kazakhstan on Dec. 21, NASAofficials said.

Duringtoday's spaceflight, McArthur and Tokarev left the ISS in an unmannedconfiguration, with many systems controlled from the ground, as a precautionarymeasure in case their spacecraft was unable to redock properly.

Their SoyuzTMA-7 spacecraft will remain at its Zarya port for the remainder of the astronauts'six-month mission. McArthur and Tokarev arrivedat the ISS aboard the spacecraft with U.S. space tourist GregoryOlsen on Oct. 3, 2005.