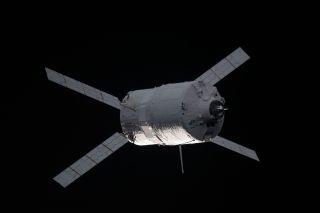 An unmanned European cargo ship as large as a double-decker bus inside will have to wait a bit longer before leaving the International Space Station due to computer problems, NASA officials say.

The robotic Automated Transfer Vehicle 3 (ATV-3) spacecraft was slated to undock from the space station Tuesday evening (Sept. 25), but a technical glitch with a laptop computer inside the station prevented to orbital departure. The two spacecraft were scheduled to part ways at 6:35 p.m. EDT (2235 GMT).

Station commander Sunita Williams of NASA told Mission Control that commands sent from the laptop apparently were not reaching the ATV spacecraft. Engineers are expected to meet early Wednesday to discuss the malfunction and determine when the next undocking attempt can be made, NASA officials said.

The ATV-3 spacecraft, which is also known as Edoardo Almadi in honor of the late Italian physicist of the same name, is the third unmanned cargo ship built by the European Space Agency to send food, water, science gear and other supplies to the International Space Station. The spacecraft launched to the station in late March and delivered 7.2 tons of food to the orbiting lab.

The cylindrical ATV spacecraft are 32 feet long (10 meters) and nearly 15 feet wide (4.5 m). They are disposable spacecraft designed to fly themselves to the space station, and then be jettisoned at mission's end to burn up in Earth's atmosphere somewhere over the Pacific Ocean. The European Space Agency commands the spacecraft from a mission control center in Toulouse, France.

The fourth ATV mission will launch the ATV-4 Albert Einstein to the station in April 2013.