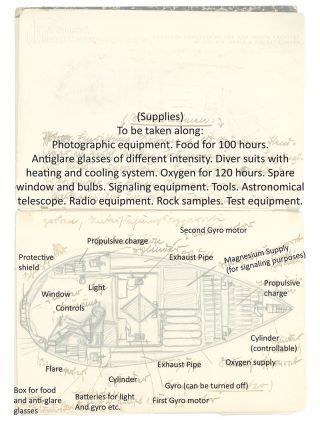 Translated from the original German, rocket scientist Wernher von Braun's boyhood notebook page details the supplies needed for a trip into space. A copy of the page is flying to the International Space Station.
(Image: © U.S. Space & Rocket Center)

Two early space leaders whose work helped lead to the International Space Station (ISS) were remembered on Friday (March 23) with the launch of their writings on board an unmanned supply craft bound for the orbiting laboratory.

German rocket pioneer Wernher von Braun, who was born 100 years ago to the day, and Edoardo Amaldi, an Italian physicist who was also memorialized with his name on the spacecraft, were each represented on board by copies of vintage dispatches that illustrated their respective visions for space exploration.

The scanned pages from von Braun's boyhood notebook and a blueprint of a letter that Amaldi wrote in 1958 were flown on the European Space Agency's (ESA) Automated Transfer Vehicle-3 (ATV-3) "Eduardo Amaldi," which was launched atop an Ariane 5 rocket from the Guiana Space Center in Kourou, French Guiana at 12:34 a.m. EDT (0434 GMT).

The cargo freighter, which was packed to the brim with 7.2 tons of supplies for the space station such as clothing, food, water, experiments, and fuel, set weight records as the heaviest supply shipment sent to the orbital complex and the heaviest payload ever lofted by the Ariane in its 205 flights since 1979. [Dazzling Night Launch Photos of Europe's ATV-3]

ATV-3 "Edoardo Amaldi" is slated to arrive at the station on March 28 for a 6:32 p.m. EDT (2232 GMT) docking with the Russian Zvezda service module. It will remain berthed at the complex until September.

"(Supplies) to be taken along"

The ATV will deliver to the space station experiments and equipment from ESA, NASA, and the Japan Aerospace Exploration Agency (JAXA). The cargo craft also has food and care packages for the station's crew.

Extensive planning went into what to pack aboard ATV-3, which is mimicked in the pages from Wernher von Braun's childhood notebook now on board the station-bound ship.

Written when von Braun was just 10 years old, long before he would lead the development of the German V-2 rocket in the 1930's and manage the Saturn V booster that would ultimately land 12 Americans on the moon three decades later, the manuscript outlines in text and drawing the many supplies needed aboard a space vehicle. [Photos: Wernher von Braun: Rocket Pioneer]

The imagined cargo, which is also labeled on von Braun's cross section sketch of a spacecraft, include photographic equipment, "food for 100 hours, oxygen for 120 hours," an astronomical telescope and radio equipment.

"This is one of, if not the earliest artifact that exists that literally illustrates von Braun's boyhood desires to achieve spaceflight," Ed Stewart, the director of exhibits and curation at the U.S. Space & Rocket Center in Huntsville, Ala., told collectSPACE.com. "While other mementos of his have flown in space before, we think this holds particular significance due to its content and the incredibly personal nature of the notebook."

It was a coincidence that the scanned pages launched on what would have been von Braun's 100th birthday (he died in 1977 at age 65). Originally scheduled to lift off on March 9, ATV-3's departure was delayed after it was discovered that some of its stowage bags were not properly strapped down for flight.

According to Stewart, high quality copies, rather than the original pages, were flown because the 1922 notebook is "incredibly fragile." The museum has organized a traveling exhibit of artifacts celebrating von Braun's 100 years and his American journey that will include a replica of the book for similar reasons.

"It was a piece that obviously meant a lot to him, as he managed to protect it through World War II, the transition to the United States and about 30 years thereafter before it was donated the U.S. Space & Rocket Center," Stewart said. "Unfortunately, we were not able send the real thing."

"Given its unique nature, we felt it was safest that it stay in its home," he said.

Like the others, Amaldi, was a pioneer in his field, nuclear physic, while becoming as a visionary for European space endeavors.

Made famous for the discovery of slow neutrons that later made possible the nuclear reactor, Amaldi is credited as the "father of Italian space research" and was one of the few who prompted action toward a space organization for Europe. His and others' advocacy ultimately lead to the founding of the European Space Research Organization, a predecessor to the modern European Space Agency.

"By naming ATV-3 after Edoardo Amaldi, we celebrate a great Italian but also a committed European [leader] who understood the importance of pooling resources and minds together to achieve important results," said Simonetta Di Pippo, ESA's human spaceflight director. "We are paying tribute to a visionary mind, to a great scientist but also to an idea of cooperation that is embodied in the International Space Station partnership."

Amaldi was a strong believer in the open nature of science and the need for international cooperation. ATV-3's flight recognizes his contribution not only with his name on the spacecraft. A blueprint of a letter written by Amaldi in 1958 is flying on board the cargo craft.

The historic document reflects his vision for a non-military European space organization. According to ESA, Amaldi's words are being flown to space to attract, as he stated in the letter, "the liveliest part of the new generation."