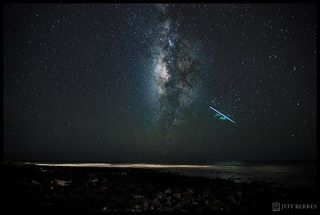 Meteoroids streaking through the atmospheres of planets such as Earth, Mars and Venus can change these worlds' air, in ways that researchers are just now beginning to understand.

Most planetary atmospheres are made up of simple, low-mass elements and compounds such as carbon dioxide, oxygen and nitrogen. But when a debris particle, or meteoroid, passes through, it can shed heavier, more exotic elements such as magnesium, silicon and iron.

Such elements can have a significant impact on the circulation and dynamics of winds in the atmosphere, researchers say.

"That opens up a whole new network of chemical pathways not usually there," said Paul Withers of Boston University. [Infographic: Earth's Atmosphere Top to Bottom]

Part of a planet's upper atmosphere, the ionosphere contains plasma — a mixture of positively charged (ionized) atoms or molecules and the negatively charged electrons stripped from them. When simple elements such as oxygen move into this outer shell, they break apart easily, decaying in a matter of minutes.

But meteoroids streaking toward a planet's surface carry heavier metals that can be removed in a variety of ways. A grain of dust, for instance, may rapidly burn up, shedding already-ionized magnesium as it falls. Or, neutral magnesium may be torn from the small rock, then receive a charge from sunlight or from stripping an electron from another particle. The newly charged elements can take as much as a full day to decay.

Meteoroids that blaze a trail through the atmosphere are called meteors, or shooting stars. Only those that make it to the ground are meteorites.

"When we add metal ions to the ionosphere as a result of this meteoroid input, we create plasma in regions where there wasn't any plasma there to start out with," Withers told SPACE.com.

In a recent article for Eos, the American Geophysical Union's newspaper covering Earth and space sciences, Withers discusses important questions raised by the recent wealth of research on the upper atmosphere of Mars and Venus.

Over the last decade, scientists have collected more and more information about the ionospheres of Mars and Venus. Though one might envision the composition and location of the two planets would create different interactions in the ionosphere, the two are actually very similar, scientists say. [Video: Does the Moon Have a Strange Ionosphere?]

"If you stand at the surface of the two planets, they are very different," Withers said. "But up at about 100 kilometers (62 miles), conditions are surprisingly similar."

The pressures, temperatures, and chemistry at high altitudes are comparable for the two planets. So too are many of the properties of the layers of charged particles shed by meteoroids.

"The plasma densities are quite similar on average on all three planets, which is not what you might expect on the first impression," Withers said, referring to Earth, Mars and Venus.

Since the sun is the ultimate driving force for most ionization processes, it's tempting to assume that Venus has more particles in a given area than Mars does because it orbits twice as closely to our star. Instead, the two planets have similar densities, which differ from Earth's measurements by only a factor of ten.

At the same time, the layers affected by the meteoroids on Earth are very narrow, maybe only a mile or two wide, while Venus and Mars both have layers stretching six to eight miles.

According to Withers, the difference may come from the presence of Earth's strong magnetic field, a feature lacking on the other two planets. But scientists aren't certain how much of a role the field actually plays.

To study Earth's ionosphere, scientists can launch rockets to take measurements in the region. But the process is more complicated for other planets.

As a spacecraft travels through the solar system, a targeted radio signal sent back to Earth can be aimed through the ionosphere of a nearby planet. Plasma in the ionosphere causes small but detectable changes in the signal that allow scientists to learn about the upper atmosphere.

This process — known as radio occultation — doesn't require any fancy equipment, only the radio the craft already uses to communicate with scientists on Earth.

"It's really one of the workhorse planetary science instruments," Withers said.

Because it is so simple, the process has been applied to every planet ever visited by spacecraft.

Only in recent years has enough data come back on Venus and Mars to seriously examine their upper atmospheres. As of yet, no numerical simulations have been created to explain some of the differences, but Withers expressed hope that this would change in the near future. Such simulations could help answer some of the questions that the observations have raised.

Withers also hopes that, in time, a detailed understanding of the ionosphere could even help scientists engage in a kind of "atmospheric archeology" for Venus and Mars.

One day, scientists may be able to track the history of comets in the solar system by measuring how planetary atmospheres have been affected by the icy wanderers' shed dust and gas. But conclusions drawn by this sort of sleuthing are probably a ways down the road, Withers said.