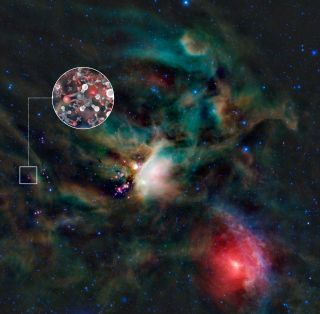 This image shows the Rho Ophiuchi star-forming region in infrared light, as seen by NASA’s Wide-field Infrared Explorer (WISE). IRAS 16293-2422 is the red object in the center of the small square. The inset image is an artist’s impression of glycolaldehyde molecules, showing glycolaldehyde's molecular structure.
(Image: © ESO/L. Calçada & NASA/JPL-Caltech/WISE Team )

What a sweet cosmic find! Sugar molecules have been found in the gas surrounding a young sun-like star, suggesting that some of the building blocks of life may actually be present even as alien planets are still forming in the system.

The young star, called IRAS 16293-2422, is part of a binary (or two-star) system. It has a similar mass to the sun and is located about 400 light-years away in the constellation of Ophiuchus. The sugar molecules, known as glycolaldehyde, have previously been detected in interstellar space, but according to the researchers, this is the first time they have been spotted so close to a sun-like star.

In fact, the molecules are about the same distance away from the star as the planet Uranus is from our sun.

"In the disk of gas and dust surrounding this newly formed star, we found glycolaldehyde, which is a simple form of sugar, not much different to the sugar we put in coffee," study lead author Jes Jørgensen, of the Niels Bohr Institute in Denmark, said in a statement. "This molecule is one of the ingredients in the formation of RNA, which — like DNA, to which it is related — is one of the building blocks of life."

Glycolaldehyde can react with a substance called propenal to form ribose, which is a major component of RNA, or ribonucleic acid. RNA is similar to DNA, which is considered one of the primary molecules in the origin of life.

Astronomers found the sugar molecules using the Atacama Large Millimeter/submillimeter Array (ALMA) radio telescope in Chile. Using ALMA, the astronomers monitored the sugar molecules and found that they are falling toward one of the stars in the binary system, explained study researcher Cécile Favre, of Aarhus University in Denmark. [7 Theories on the Origin of Life]

"The sugar molecules are not only in the right place to find their way onto a planet, but they are also going in the right direction," Favre said in a statement.

When new stars are formed, the clouds of dust and gas from which they are born are extremely cold. Much of the gas turns into ice on the dust particles, bonding together and becoming complex molecules, the researchers said.

As the newborn star develops, it heats up the inner parts of the rotating cloud of gas and dust, warming it to about room temperature, the scientists explained. This heating process evaporates the chemically complex molecules and forms gases that emit radiation that can be picked up by sensitive radio telescopes.

"A big question is: how complex can these molecules become before they are incorporated into new planets?" Jørgensen said. "This could tell us something about how life might arise elsewhere, and ALMA observations are going to be vital to unravel this mystery."

Since IRAS 16293-2422 is located relatively close to Earth, scientists will be able to study the molecular and chemical makeup of the gas and dust around the young star. Powerful instruments, including ALMA, will also help researchers see the interactions of these molecules as new alien planets form.

The detailed results of the study will be published in an upcoming issue of the Astrophysical Journal Letters.