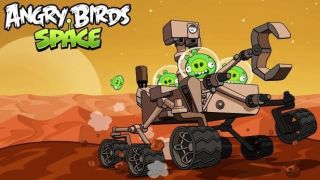 It's official — space pigs have taken over Mars.

In a humorous but beneficial partnership to both parties, Rovio, the creator of the "Angry Birds" series, has teamed up with NASA to provide something both fun and educational to players of all ages. "Angry Birds Space: Red Planet" is now available for download on both iOS and Android devices, as an update to the currently released game.

With "Red Planet," NASA was able to introduce a familiar vehicle into "Angry Birds Space" — the Mars Rover Curiosity, which recently made the trek to Mars,  much to the delight of millions. Rovio has even found a way to include Curiosity in the game, as players have to track down three hidden Rovers throughout each level.

Long-time "Angry Birds" fans will be pleased to know that the gameplay is still quite addictive, and along with the cool gravity-based elements from the original "Space" game, you have a couple of new items to help you out.

Volcanoes scattered throughout each stage give off huge air gusts that shoot your birds in different directions, keeping them in play. You can also hit asteroids that explode on impact, meaning big trouble for breakable objects — and the pigs — alike. [Angry Birds in Space (Gallery)]

In addition to providing arcade-style fun, however, "Angry Birds Space: Red Planet" also educates, as it features links to NASA web pages that discuss Mars in more detail, whether it's the recent Curiosity landing or prior visits to the Red Planet.

"Rovio is teaching huge new audiences about NASA's missions to Mars thanks to this collaboration," said David Weaver, associate administrator for communications at NASA Headquarters in Washington, in a statement. "It's a great way to introduce both kids and adults to the wonders of the planet in a fun and entertaining way."

"Angry Birds Space" has even launched into actual space in the form of a plush toy bird that flew to the International Space Station aboard a Russian Soyuz spacecraft. Once there, NASA astronaut Don Pettit used the toy and green balloons decorated as pigs to give a real-life demonstration of Angry Birds in space.

If you already own the game, the "Red Planet" update is free of charge and available for download now. (If not, the game itself is on sale for $1.) Rovio has said that it will be coming to other platforms in the weeks ahead, though a timetable has not been set. Check out the YouTube trailers below for a funny little introduction to the pack, as well as the gameplay.

This story was provided by TechNewsDaily, sister site to SPACE.com.FollowSPACE.com on Twitter @Spacedotcom. We're also on Facebook & Google+.