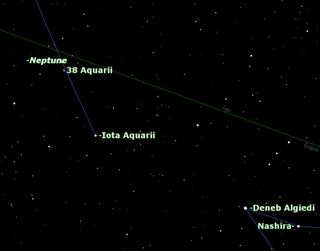 Use this chart to locate Neptune: start from Capricornus and navigate into neighboring Aquarius on Aug. 24. At the time, Neptune will be in opposition.
(Image: © Starry Night Software)

The planet Neptune is about to take center stage in Earth's night sky.

On Friday night (Aug. 24) the distant Neptune will reach a point called opposition in the constellation Aquarius. A planet is in opposition when it is exactly opposite the sun in Earth's sky. This marks the one date in the year when the planet is visible all night long.

This means Neptune will rise into the night sky at local sunset and set at local sunrise on Friday. The planet also reaches its highest point in the sky exactly at local midnight. Because most of us are on Daylight Saving Time in the Northern Hemisphere, this actually occurs at 1 a.m. local time.

Now that Pluto has been reclassified as a dwarf planet, Neptune is the most distant planet from the sun in our solar system. [Amazing Photos of Neptune]

On the night of opposition, Neptune will be 2,788 million miles (4,487 million kilometers) from the sun and 2,694 million miles (4,336 million km) from Earth. Huge numbers like these are impossible to understand, so astronomers like to think of them in terms of the "astronomical unit."

One astronomical unit, or AU, is the average distance between the Earth and the sun (about 93 million miles, or 150 million km). So on Friday, Neptune will be almost 29 times farther from Earth than Earth is from the sun.

Only five planets were known prior to the invention ofthe telescope: Mercury, Venus, Mars, Jupiter, and Saturn (Earth was not considered a planet back then). All five are quite bright, brighter than most stars, and easily spotted in the night sky with the naked eye.

Neptune through the ages

Uranus was discovered accidentally by William Herschel in 1781 while searching for deep sky objects. After a few years astronomers realized that Uranus was not following the exact orbit it should, and suspected that there might be another large planet in an orbit beyond Uranus affecting its position.

Mathematicians Adams and Le Verrier independently used the deviations in Uranus' orbit to calculate the position of this planet, but no one seemed interested in actually looking for it. Finally in 1846, Galle turned a telescope on the suggested location, and almost immediately spotted Neptune.

Oddly enough, famed astronomer Galileo Galilee had observed Neptune twice in 1612 and 1613, when it was very close to Jupiter, but mistook it for a star because of its small size and slow movement.

Most planets are brightest when they are in opposition, but Neptune is so far away that it only reaches magnitude 7.8, requiring at least a 2-inch diameter telescope to be visible. This includes 7x50 and 10x50 binoculars.

How to see Neptune

This week Neptune can be easily spotted in binoculars or a small telescope. All you will see is a tiny blue-green disk, hardly larger than a pinpoint, but knowing this is the farthest outpost of our planetary system still makes it worth the search.

Start with the triangular constellation Capricornus, just to the east of Sagittarius (to its left in the northern hemisphere), on the southern horizon around 1 a.m. at present. Look for the two stars at the eastern angle of Capricornus' triangle, Nashira and Deneb Algiedi. These two stars point leftward towards Iota in Aquarius. Use Iota and 38 Aquarii to locate Neptune, as shown in the chart.

Even in a very large telescope, Neptune's disk is very tiny, 2.3 arc seconds in diameter, as compared with Jupiter at about 45 arc seconds. About the most that can be seen is its unusual blue-green color, quite unlike any star.

If you miss Neptune on the 24th, you can still use this chart at any time over the next few weeks because Neptune moves very slowly, gradually getting closer to 38 Aquarii.