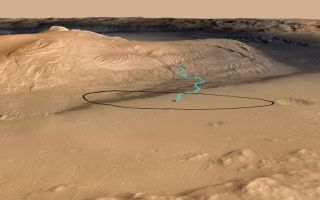 NASA will hold a press conference today (Aug. 17) to give a status update on the Mars rover Curiosity, which is poised to take its first drive on the Red Planet next week.

The briefing will take place at 1:30 p.m. EDT (1730 GMT) in a teleconference that will be webcast online for the public.

The Mars rover Curiosity landed on the Red Planet on Aug. 5 and is currently parked inside Gale Crater, a 96-mile-wide (155-kilometer) depression with a central mountain rising 3 miles (5 km) above the crater floor. The rover will spend the next two years studying the region to determine if it was ever habitable for primitive life.

Since landing, the rover has been beaming home stunning new photos of the Martian surface.

"Mission controllers at NASA's Jet Propulsion Laboratory in Pasadena, Calif., are checking out Curiosity's subsystems and 10 instruments," NASA officials wrote in an update.

NASA will stream the audio of today's teleconference here: http://www.nasa.gov/newsaudio

The public and media can find visuals for the teleconference here: http://go.nasa.gov/curiositytelecon

Today's briefing will occur about 30 minutes later in the day compared to earlier Curiosity rover daily updates. The change is due to the availability of the rover's mission team, NASA officials said.

The $2.5 billion Mars rover Curiosity is the largest rover ever sent to another planet. It rides on six large wheels and uses heat from an onboard plutonium source to power its intricate systems.