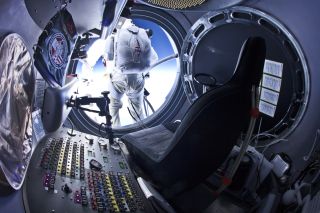 A daring supersonic "space jump" that would shatter the world record for the highest skydive in history has been delayed until October due to a damaged balloon capsule, project organizers say.

Austrian daredevil skydiver Felix Baumgartner, 43, was expected to make the historic skydive sometime this month over the New Mexico desert as part of the Red Bull Stratos project. The dive, which organizers have dubbed a "space jump," will send Baumgartner more than 120,000 feet (36,575 meters) up by balloon so he could leap into the sky from a custom-built capsule.

Baumgartner tested the capsule (and his nerves) in a rehearsal skydive last month, when he jumped from a height of 97,145.7 feet (29,610 m) over Roswell, N.M. While the July 25 skydive itself was a success, when recovery crews retrieved Baumgartner's balloon capsule, they found that it had been damaged during its long descent back to Earth. [Photos of Baumgartner's 2nd 'Space Jump' Test Dive]

"After Baumgartner jumped from the capsule, it was detached from the balloon shortly before it would have drifted into U.S. military airspace southwest of Roswell," Red Bull Stratos officials explained in a statement. "However, after descending under parachute it landed on a rocky, uneven surface and was thrown onto its side."

The result: damage to the capsule's outer shell, framework and other vital components, Red Bull Stratos officials said. After its recovery, the capsule was transported to Sage Cheshire Aerospace in Lancaster, Calif., for more testing.

The capsule's vital inner pressure sphere, which houses Baumgartner during his ascent, is intact, but several life support system components are being replaced as a precaution, project officials said.

The repaired capsule will undergo another safety test in an altitude chamber, currently slated for Sept. 24 or so, in San Antonio, Texas, to make sure it can withstand the stratospheric environment.

"Once this test has been completed successfully … the craft will be certified safe to fly, with the final mission set for sometime in the first two weeks of October," officials said.

“The more practice you have, the more confidence you have," Baumgartner said just after the latest test jump. "We now have a good feeling of what to expect and are ready to go."

Meanwhile, Red Bull Stratos mission managers will keep an eye on changing weather conditions for Baumgartner's October jump window. Conditions must be safe not only for the skydive, but also for the long ride to jump height by Baumgartner's 55-story balloon, officials said.