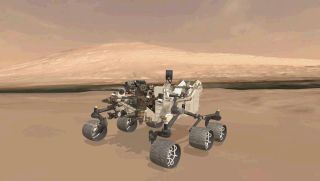 The Mars rover Curiosity has a busy schedule ahead of it for its second full day on the Red Planet.

Curiosity is a car-size, $2.5 billion rover designed to investigate whether Mars was ever habitable to microbial life. The robot landed on our neighboring world Sunday (Aug. 5) after an eight-month journey from Earth, and is designed to operate for at least two years.

The rover hasn't begun to rove yet — that's still a few weeks away — but it's already started to take photos of its new base inside Mars' Gale Crater. Curiosity has also begun firing up its various instruments, one by one, and running them through their paces. [Huge Mars Robot Armed With Laser, Cameras, Curiosity (Infographic)]

During its first full Martian day, or Sol (which occurred Monday night to Tuesday night, North American Earth time), Curiosity turned on its Radiation Assessment Detector (RAD), which measures the ambient radiation on Mars, and conducted the first sensor calibration on its Rover Environmental Monitoring Station (REMS), designed to monitor wind speed, wind direction and air temperature. That calibration test did not work as planned, but Watkins said the REMS team was taking a look at the instruments parameters and expects to correct it soon.

On its second Sol — which began Tuesday (Aug. 7) at 6:30 p.m. PDT (9:30 p.m. EDT) — the rover plans to try out more of its gear. It is set to use motors and actuators to deploy its vertical remote-sensing mast, which houses a laser that will be used to zap rocks to measure their chemical composition, as well as Curiosity's best cameras, designed to take high-quality color images. The first order of business for these cameras will be to photograph a calibration target mounted on the rover itself.

Curiosity's management team also plans to establish direct communications with the rover today. So far, all messages sent to and from the robot have been routed through one of two NASA probes orbiting Mars. But Curiosity also houses a high-gain antenna onboard that should be able to receive communications directly. To make it work, though, the antenna team must adjust its pointing direction slightly.

"The antenna mechanism is in fine shape, but it was not quite pointed accurately at the Earth to get the telecom we wanted," Watkins said. "The plan for tomorrow is to establish direct-to-Earth communications by changing the pointing of the high-gain antenna."