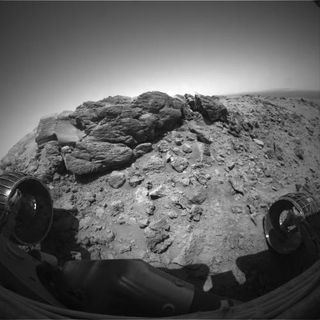 NASA's Mars Exploration Rover Spirit completed a difficult, rocky ascent en route to reaching a captivating rock outcrop nicknamed 'Hillary' at the summit of 'Husband Hill.' At the end of the climb the robotic geologist was tilted almost 30 degrees and had to wiggle its wheels to gain a more solid footing.
(Image: © NASA/JPL-Caltech.)

Afternearly one year of rolling and scrambling up Husband Hill, NASA's Mars roverSpirit is headed back down towards new and rocky pastures.

The roveris making its way down Husband's slopes toward a basin to the south, where ascience target known as "Home Plate"awaits.

Spirit'sdescent marks a new phase of the rover's Mars exploration, which has carried itacross the plains and up one hill of its Gusev Craterlanding site, Squyres told SPACE.com.

Meanwhile, Opportunity- Spirit's robotic partner in Mars exploration - has overcome a series ofglitches as it roves around a wide crater dubbed Erebus on the other side ofthe red planet.

Aftercomparing rocks at its summit - the last target, an outcrop dubbed "Hillary,"required a bit of rover wiggling to observe - with those at lower elevations,Husband Hill's geology appears to be very similar from the top down, missionscientists said.

"It's verysimilar in composition, with very similar textures when you look at it with amicroscope, but it's dipping in all different directions," Squyressaid of the hill's geology. "What it says is that the geology around here ispretty complicated."

HusbandHill's similar composition seems to speak toward a violent beginning,researchers said, adding that the rise may represent part of an ancient crater rim or have been formed through some otheruplift process.

"My firstpersonal reaction is that it's maybe not surprising since Mars gets beaten up alot by impacts," said Albert Haldemann, rover deputyproject scientist at NASA's Jet Propulsion Laboratory in Pasadena, California,during an interview, adding that researchers have not settled on an impact asthe hill's genesis.

Spirit is currentlymaking its may along an area dubbed "Haskin Ridge" and will head toward "HomePlate," though the science target is not an ultimate goal.

"There's alot of good stuff beyond it," Squyres said.

Haldemannadded that it could take two months for Spirit to completely descend HusbandHill, depending on the number of interesting spots it turns up on the way down.

UnlikeSpirit, Opportunity experienced a series of glitches this month that stalledscience operations for several days.

"We had alittle string of bad luck and some hiccups here and there," Haldemannsaid.

On Oct. 4 -its 603rd day, or sol, on Mars - the rover halted a planned 148-foot(45-meter) drive after just 16 feet (five meters) when its wheels beganslipping in Martian sand. The incident triggered Opportunity's maximum sliplimits, and canceled the drive as a precaution against bogging down, missionmanagers said.

But theunplanned stop was a success of sorts for Opportunity, proving to rover controllersand mission scientists that the measures taken to prevent the robot fromtrapping itself in the Martian sand again work well. The rover boggeddown in a dune for nearly five weeks early this year.

Opportunityalso experienced two separate computer reboots - one well understood, the othernot so much - that also prevented the robot from carrying out its scienceduties. The first reboot was due to a documented flight software glitch, whilethe second one also appears familiar to mission scientists.

"The goodnews is that it's happened again in the same fashion as it did some 200 solsago," Haldemann said of the second reboot glitch."And that may help us determine its cause."

But despitethe glitches, Opportunity is again making steady progress around Erebus, ashallow depression that stretches about 984 feet (300 meters) in diameter.

"We're notgoing to take any risks," Squyres said, adding that it's unlikely Opportunity will explore Erebus as in depth asit did EnduranceCrater. "It's a big crater in terms of diameter, but really shallow. It'snothing like Endurance."

WhileSpirit and Opportunity have each performed well beyond their initial, 90-day mission- they've kept scientists on Earth busy for more than oneand a half years - the two rovers still have one distinctively Martianmilestone ahead of them.

But both robotshave to keep roving at just over one more month to make it. Unlike Earth, whichtakes about 365 days to circle the Sun, Mars takes about 687 days - or sols -to make the trip.

On Nov. 21,Spirit will have spent an entire Martian year trekking across the red planet'ssurface, with Opportunity following in turn on Dec. 11.

"I actuallysee the Mars year anniversary as being more significant," Squyressaid, "We will have seen Mars over an entire seasonal cycle."