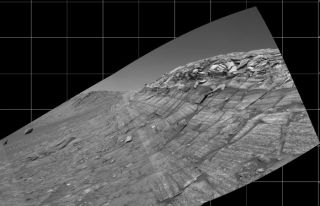 A majestic view of Burns Cliff as it appeared to Opportunity on Nov. 6, 2004. The rover will not be able to reach parts of the cliff due to terrain that appears to treacherous to pass, but it can safely advance to the squarish white rock at the center of this image. After examining the site for a few days from that position, the rover will turn around and head out of Endurance Crater.
(Image: © NASA/JPL.)

NASA's Mars rover Opportunity will back its way out of a crater it has spent four months exploring after reaching terrain that appears too treacherous to tread.

Sitting at an incline inside "Endurance Crater" in Meridiani Planum, Opportunity has apparently reached in impasse. To the rover's right, slopes are too steep to pass, while on the left the terrain appears to contain sandy patches where Opportunity could bog down.

A move in either direction could prove mission-ending for a rover that has performed well-beyond its nominal six-month mission. With other science targets still remaining outside of "Endurance," flight controllers have decided to leave the crater after looking - but not touching - an area dubbed "Burns Cliffs," a 33-foot (10-meter) high scarp that has tantalized researchers since Opportunity first entered the crater on June 8.

"We wanted to get a little closer than we are but this is what we can get safely," said Joy Crisp, project scientist for the rover mission at NASA's Jet Propulsion Laboratory (JPL), in a telephone interview. "Really what we want to see is the structure and textures of the layers in the cliff."

The rover is still 50 feet (15 meters) from the a region at the base of the cliff where two layers of rock meet at different angles. Opportunity will use its mast-mounted panoramic camera and miniature thermal emission spectrometer (Mini-TES) - both remote sensing instruments - to collect information researchers hope will show whether the Burns Cliff's layers were formed by water or deposited by wind.

"But after we're done here, it'll be time to turn around," said Steve Squyres, principal investigator for the rover mission at Cornell University, in a statement. "Going any farther could cut off our line of retreat from the crater, and that's not something anybody on the team wants to do."

Other attractive sites await Opportunity outside the stadium-sized "Endurance Crater." They include the heat shield that protected the rover when it slammed into the Martian atmosphere during landing and "Victoria Crater," a depression six times larger than Endurance sitting three miles (5 kilometers) south of Opportunity's current position.

Rover engineers have also completed troubleshooting efforts with Opportunity's robotic twin Spirit, which is currently exploring the Columbia Hills on the other side of Mars.

The rover has been intermittently sending out signals indicating the brakes on two of its wheels were functioning properly. But after a series of tests and analysis, engineers have determined that the rover sensor charged with checking Spirit's brake release is most likely sending out a false indication. In the future, rover drivers will disregard the alert and presume Spirit's brakes are releasing as expected.

Some Mars researchers hope the rover may even summit one of the Columbia Hills.

"I would like to get to the top and get to look down," said Jim Erickson, rover project manager at JPL, in a telephone interview. "I don't know what we're going to see."