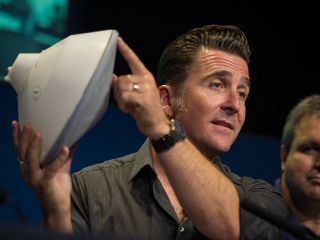 PASADENA, Calif. — NASA's huge Mars rover Curiosity is closing in on the Red Planet, and the Martian weather should be all clear for the robot's nerve-wracking landing Sunday night (Aug. 5), scientists say.

Over the last few days, Curiosity's mission team has been watching a big Mars dust storm raging to the southwest of Gale Crater, the rover's landing site. But new pictures taken by NASA's Mars Reconnaissance Orbiter spacecraft on Thursday (Aug. 2) suggest that the storm won't be a factor, mission scientists said.

"It will probably not reach Gale Crater by the time we land, and if it did, the amount of dust in that cloud is not going to affect the entry, descent and landing in any meaningful way," Vasavada told reporters. [Photos: How Curiosity's Nail-Biting Landing Works]

The mission is on track to land by 10:31 p.m. PDT Sunday night (1:31 a.m. EDT, 0531 GMT on Aug. 6), mission managers said. That's when a signal denoting the landing should be received at the rover's mission control center at JPL. It takes 14 minutes for signals to cross the distance from Mars to Earth, NASA has said.

The $2.5 billion Mars rover Curiosity has been built to withstand the worst dust storms that can crop up on Mars at this time of year, Vasavada  added. So the worry with a big storm is not that the rover could be lost, but rather that it could be pushed off course from its desired touchdown spot.

"This is a very tolerant spacecraft," Vasavada said. "It's almost putting us out of business in terms of predicting the weather. Previous spacecraft have been much more sensitive to the atmospheric condititions."

Part of this tolerance stems from Curiosity's massive bulk. It tips the scales at 1 ton, making it about five times heavier than either Spirit or Opportunity, the twin NASA rovers that touched down on the Red Planet in January 2004.

Curiosity is the centerpiece of NASA's Mars Science Laboratory mission, or MSL. The car-size rover's main goal is to determine if the Gale area is, or ever was, capable of supporting microbial life.

But before Curiosity can start its work, it must first land successfully. The huge rover will be trying out a brand-new touchdown method, in which it will be lowered to the Martian surface on cables by a rocket-powered sky crane — a move that's never been tried on another planet.

While a long string of events must still work perfectly for Curiosity to hit the red dirt intact, it appears the weather won't make things trickier than they have to be.

"Fortunately, Mars is playing nice, and we're going to get good conditions for Sunday," Vasavada said.