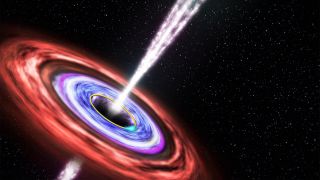 This illustration shows an artist's view of Swift J1644+57, a black hole 3.9 billion light-years away. Scientists have picked up a signal thought to be the death "scream" of a star falling into the black hole.
(Image: © NASA's Goddard Space Flight Center )

As a doomed star spirals closer and closer to a black hole that's about to gobble it up, it lets out periodic bursts of light that scientists liken to dying screams, scientists say.

The star is falling into a gigantic black hole in the center of a distant galaxy that lies 3.9 billion light-years away in the direction of the constellation Draco. As the remains of the star get pulled in, it releases blips of light about every 200 seconds, with occasional lags.

"You can think of it as hearing the star scream as it gets devoured, if you like," Jon Miller, a University of Michigan astronomer, said in a statement. Miller was part of a team that detected the light blips using two orbiting X-ray telescopes: NASA and Japan's Suzaku, and Europe's XMM-Newton.

The researchers think the star has been pulled apart by the black hole's gravity into a disk of material that orbits the black hole. [The Strangest Black Holes in the Universe]

"In order for the black hole to feed from a star that its gravity has broken apart, the remains of the star must form an accretion disk surrounding the black hole," said the study's leader, University of Michigan astronomer Rubens Reis. "The disk gets heated up and we can see emissions from the disk very close to the black hole in X-rays. As this matter is falling in, it gives a quasiperiodic wobble and that's the signal we detected."

Though the dying star's signal comes to us in the form of light, the researchers liken it to sound because it comes at a characteristic frequency that, if converted to sound, would make an ultra-low D-sharp.

Similar oscillations have been observed in matter falling into smaller black holes in our own galaxy, and a huge black hole like this one in the center of a nearby active galaxy.

Never before have such screams been heard from a star falling prey to a black hole so distant, or one that had been thought to be dormant, like this one.

"This is telling us that the same physical phenomenon we observe in stellar mass black holes is also observed in black holes a million times the mass of the sun, and also for black holes that were previously asleep," Reis said. "It speaks to the invariant nature of physics, which I think is very beautiful."

The findings are described in a paper published in the Aug. 3 issue of the journal Science.