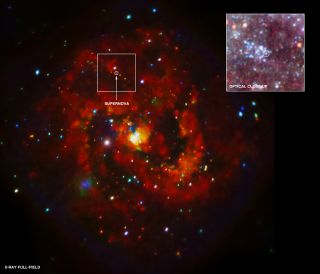 This new Chandra image of M83 is one of the deepest X-ray observations ever made of a spiral galaxy beyond our own. This full-field view of the spiral galaxy shows the low, medium, and high-energy X-rays observed by Chandra in red, green, and blue respectively. Image released July 30, 2012.
(Image: © X-ray: NASA/CXC/STScI/K.Long et al., Optical: NASA/STScI )

A new, extremely deep photo of the site of a supernova explosion that was observed in 1957 has revealed X-rays emanating from the source.

The photo, taken by NASA's Chandra X-Ray space telescope, is the first to spot X-ray light coming from the remains of the dead star that sparked the explosion, and indicates that the supernova likely transformed the star into a pulsar. Pulsars are super-dense, fast-rotating objects that have been compressed so tightly they are composed only of neutrons.

A more recent Chandra exposure of 219 hours and 49 minutes — about eight and a half days — collected enough light to see X-ray radiation from the spot. The photo, taken in 2010 and 2011, was released by NASA today (July 30).

In the picture, red, green, and blue light represents low, medium, and high-energy X-rays, respectively. The site of SN 1957D is located on the inner edge of the spiral arm just above the galaxy's center, marked with a box in the photo.

Analysis of the energy levels of the X-rays coming from SN 1957D suggests that the star that died in the supernova is now a pulsar, and that furthermore the pulsar has created a cocoon of fast-moving charged particles around it called a pulsar wind nebula.

"If this interpretation is confirmed, the pulsar in SN 1957D is observed at an age of 55 years, one of the youngest pulsars ever seen," scientists wrote in a statement.

The new findings will be published in an upcoming issue of The Astrophysical Journal.