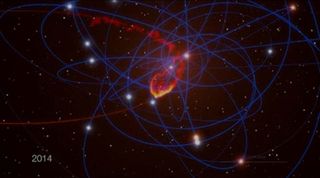 This still from a computer animation shows a simulation of a giant space cloud falling into Sagittarius A*, the supermassive black hole at the center of our own Milky Way galaxy, in mid-2013. Image added on July 2, 2012.
(Image: © European Research Media Center)

The colossal black hole at the center of our Milky Way galaxy will soon to get a big, tasty meal, astronomers say.

A humongous gas cloud is on a collision course for the Milky Way's core — the home of Sagittarius A* (pronounced "Sagittarius A-star"), which scientists suspect is a supermassive black hole with the mass of 4 million suns.

When the huge gas cloud arrives in the vicinity, which it will appear to us to do in mid-2013, it will surely be swallowed up by the hungry black hole, scientists say.

Astrophysicist Stefan Gillessen of the Max Planck Institute for Extraterrestrial Physics in Munich, Germany, has been observing the Milky Way's center for about 20 years. So far, he's seen only two stars come as close to Sagittarius A* as the cloud will.

"They passed unharmed, but this time will be different: the gas cloud will be completely ripped apart by the tidal forces of the black hole," Gillessen said in a statement.

The cloud is due to pass within about 36 light-hours (about 25 billion miles, or 40 billion kilometers) of the black hole. Its speed, which is now more than 5 million mph (8 million km per hour), has nearly doubled in the last seven years as it approaches its doom. It has already started to shred, and is likely to break up completely before it hits the black hole.

While black holes themselves are impossible to see — they are objects whose gravitational pull is so strong, even light cannot escape — astronomers can watch what happens when matter falls into one. The areas around some active supermassive black holes are so bright, in fact, that they are visible across the universe.

Scientists are looking forward to the rare chance to see something fall into our own galaxy's black hole. As it falls nearer and nearer, the cloud is expected to heat up and release bright X-ray radiation that should be visible from Earth.

The collision-bound cloud was discovered by a team of astronomers led by Reinhard Genzel at the European Southern Observatory.