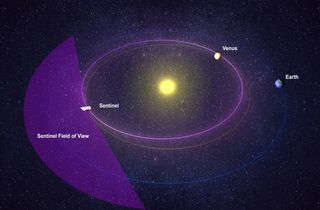 This image depicts the region of view of the B612 Foundation's planned Sentinel Space Telescope to monitor potentially dangerous asteroids.
(Image: © B612 Foundation)

The hunt is on. A group of scientists has banded together to build the world’s first privately funded deep-space telescope, to hunt for asteroids that could pose a major threat to Earth.

The private space telescope forms the heart of Project Sentinel, a deep-space mission being unveiled today (June 28) in Mountain View, Calif., by the B612 Foundation, a nonprofit group of scientists and explorers that has long advocated the exploration of asteroids and better space rock monitoring.

Project Sentinel involves the development of a super-snooper telescope that would be placed in orbit around the sun. The goal, foundation officials say, is to create the first comprehensive dynamic map of our inner solar system.

That map would yield a lively look at the present and future locations and trajectories of near-Earth asteroids, paving the way to protecting the Earth from future impacts and opening the solar system to future exploration. [Sentinel Space Telescope's Asteroid Mission (Pictures)]

An asteroid sentinel in space

Ed Lu is B612 chairman and CEO, a former NASA astronaut who has flown on the space shuttle and Russia's Soyuz capsule and lived aboard the International Space Station.

"The reason we’re doing this is because we can!"Lu told SPACE.com

Private organizations can now carry out awe-inspiring and audacious projects that previously only governments could accomplish, Lu said.

"So it isn’t crazy to think of a large telescope being funded privately. In fact, historically, that has been the way large, private telescopes here on Earth have been funded. The exception here is that rather than being on the Earth, this one is orbiting the sun," Lu said.

A lot of work has gone into shaping Project Sentinel over the last year, Lu said. Akin to the architectural plans for a building, he said, a preliminary spacecraft and mission design is complete.

"This isn’t a viewgraph," Lu added."What we’ve built is the best technical team on this planet."

A firm fixed-price proposal to carry out Project Sentinel has been submitted by Ball Aerospace of Boulder, Colo., enabled in part by early infrared-detector work funded by B612.

No stranger to big space scopes, Ball Aerospace is the technical sparkplug behind such NASA-sponsored spacecraft as theplanet-hunting Kepler mission and the infrared Spitzer Space Telescope.

Under a NASA Space Act Agreement signed with B612, the space agency will provide Deep Space Network communications and tracking as well as technical support.

Hunting asteroids for all mankind

"The line in the sand is for the spacecraft to find 90 percent of near-Earth objects larger than 140 meters [459 feet] in size. That translates into approximately a 100-megaton explosion should one hit the Earth," Lu said. "If we go as long as we think we’re going to go, we’re also going to find the vast majority of Tunguskas, too." [7 Strangest Asteroids in the Solar System]

The Tunguska River in remote Siberia was the site directly under a huge explosion in 1908, an air burst of a large meteoroid or comet fragment estimated to have flattened more than 80 million trees over 830 square miles (2,150 square kilometers).

According to B612, only about 10,000 of the more than half million asteroids  larger than the 1908 Tunguska asteroidwhose orbits cross Earth’s orbit have been discovered and tracked.

This all adds up to an awe-inspiring project for the global good, the B612 NEO team said.

What’s the cost to build the Project Sentinel telescope?

"We can’t disclose the final price, but I can give you a ballpark of a few hundred million dollars. Which is, I think, a factor of several less than what NASA could do this for," Lu said.

To foot the bill for Project Sentinel, a worldwide fundraising campaign is being implemented, including outreach to citizens around the globe.

"Our constituency is everybody," said B612 spokeswoman Diane Murphy.

"If you think about it, what we are is a small capital campaign," Lu said. "At any given time in the United States, there’s probably a hundred fundraising campaigns larger than this … for symphony halls, museums, performing arts centers."

As now forecast, Project Sentinel would be launched in 2016 aboard a SpaceX Falcon 9 rocket, Lu said. The spacecraft operations center is to be based at the Laboratory for Atmospheric and Space Physics (LASP) at the University of Colorado, Boulder.

Project Sentinel would require a gravity slingshot off Venus to enter solar orbit. Data relay would be carried out through the NASA Deep Space Network. Data analysis — identification of NEO threats — is to be handled through an existing data pipeline at the Minor Planet Center in Cambridge, Mass., and the NASA Jet Propulsion Laboratory in Pasadena, Calif.

"When you stand back from this, … this is like the whole issue of mapping the U.S, and almost everything else that precedes real development and exploration," said former astronaut Rusty Schweickart, B612 chairman emeritus, who was the lunar module pilot on the Apollo 9 mission.

"The meta-view of what we’re doing … is mapping the Earth, sun, the inner solar system … the Earth Territory, if you will," Schweickart said. That, he said, would pave the way toward protecting the Earth from impacts and opening the solar system to exploration.

"An exciting aspect of Ball’s role on Sentinel is leveraging sophisticated technology developed under the Deep Impact, Spitzer, and Kepler missions for the B612 Foundation," said John Troeltzsch, the company’s Sentinel Program manager.

Troeltzsch told SPACE.com the aerospace firm will reuse deep-space elements the company helped pioneer. For the privately funded mission, that could include the science-downlink technology flown on Kepler and the cryogenic thermal-isolation system from the Spitzer Space Telescope.

The Sentinel ground system will build on the system in daily use by the Kepler mission, which is supplied to Ball by the LASP at Colorado-Boulder.

"Ball has been working on the mission concept for a NEO survey mission like Sentinel since 2005. This has allowed us to refine and iterate the design to a state of maturity that supports a commercial offering to B612," Troeltzsch said. "Although there are challenges in front of us, like the development of the focal plane detectors, the overall system is based on proven, high-heritage systems."

Troeltzsch said it’s not every day you can have fun working on a powerful space telescope and help protect the planet at the same time.

“Sooner or later one of the NEOs that Sentinel will discover will end up on a collision course with the Earth. I am sure that my kids and grandkids will appreciate the foresight B612 has shown in sponsoring this mission to help protect us all,” Troeltzsch concluded.

Leonard David has been reporting on the space industry for more than five decades. He is a winner of last year's National Space Club Press Award and former editor-in-chief of the National Space Society's Ad Astra and Space World magazines. He has written for SPACE.com since 1999.