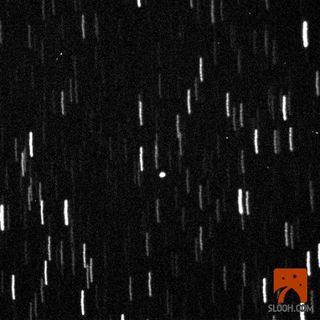 The near-Earth asteroid 2012 LZ1, which is about the size of a city block, is seen as a circular white dot in this shot taken by a telescope in the Canary Islands on June 14, 2012.
(Image: © Slooh Space Camera)

A newly discovered asteroid the size of a city block cruised past Earth well beyond the orbit of the moon Thursday night (June 14), providing a rare treat for scientists and telescope-equipped observers.

The 1,650-foot-wide (500-meter) near-Earth asteroid 2012 LZ1 came within 3.3 million miles (5.3 million kilometers) of our planet during its closest approach at 8 p.m. EDT Thursday (0000 GMT Friday). Since that's about 14 times the distance between the Earth and the moon, the asteroid was never close enough to threaten Earth, or to be seen by most backyard skywatchers.

But folks who stayed inside could get a good look on their computers. The Slooh Space Camera, an online observatory website, streamed live views of 2012 LZ1's flyby that were captured by a telescope in the Canary Islands, off the west coast of Africa.

In the Slooh feed, 2012 LZ1 appeared as an oblong white dot as it approached Earth. In a video of asteroid 2012 LZ1, recorded Wednesday (June 13) by astronomers Nick Howes, Ernesto Guido and Giovanni Sostero of Italy's Remanzacco Observatory, the space rock also appeared oblong as it moved against a star-filled background. [Photos: Asteroids in Deep Space]

The asteroid didn't exactly streak off into deep space after sidling up next to us. It's moving somewhat parallel to our planet at the moment, researchers said, meaning that large telescopes should still be able to track it for the next week or so.

Scientists are still taking 2012 LZ1's measure, for the space rock was just discovered this week. Astronomer Rob McNaught and his colleagues detected the asteroid on the night of June 10 and 11 using a telescope at Siding Spring Observatory, in the Australian state of New South Wales.

While 2012 LZ1's size and proximity to Earth qualify it as a potentially hazardous asteroid, it doesn't appear to pose much of a threat to our planet anytime soon.

"This particular one has no impact possibilities in the foreseeable future," said McNaught, who joined Astronomy magazine columnist Bob Berman on the Slooh webcast. But researchers will continue to watch 2012 LZ1 over the next few days, McNaught added, to try to map its motions out further into the future.

This isn't the first time a relatively large asteroid has zoomed by Earth's cosmic neighborhood. Last November, the huge asteroid 2005 YU55 approached much closer to Earth than 2012 LZ1 when it buzzed the planet.

The impact threat from this cloud of space rocks is real. Over its 4.5 billion-year history, Earth has been hit by asteroids repeatedly, including some that have wiped out large percentages of the planet's life forms. For example, the dinosaurs appear to have been done in by a 6-mile-wide (10-km) space rock that crashed into Earth 65 million years ago.

McNaught is not alone in the search for near-Earth asteroids. NASA astronomers and scientists around the world regularly monitor the night sky for large asteroids that could pose a threat to our planet.