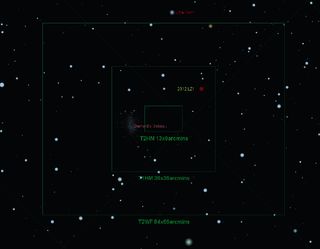 An asteroid the size of a city block is set to fly by Earth today (June 14), and you may be able to watch it happen live.

The near-Earth asteroid 2012 LZ1, which astronomers think is about 1,650 feet (500 meters) wide, will come within 14 lunar distances of Earth Thursday evening. While there's no danger of an impact on this pass, the huge space rock may come close enough to be caught on camera.

That's what the team running the Slooh Space Camera thinks, anyway. The online skywatching service will train a telescope on the Canary Islands on 2012 LZ1 and stream the footage live, beginning at 8:00 p.m. EDT today (0000 GMT Friday) — the time of closest approach.

Astronomer Rob McNaught, 2012 LZ1's discoverer, will participate in the webcast, as will Astronomy magazine columnist Bob Berman. You can watch the asteroid flyby on Slooh's website, found here: http://events.slooh.com/

During today's close approach, the asteroid will look like a 13th-magnitude "star" in the sky, Slooh officials said. That's pretty faint as far as celestial objects go, too dim to be picked up by the naked eye or a standard pair of binoculars. (In astronomy, lower magnitudes signify relatively brighter objects. Venus' magnitude is around -5, for example, while the full moon's is about -13.)

2012 LZ1 just popped onto astronomers' radar this week. It was spotted on the night of June 10-11 by McNaught and his colleagues, who were peering through the Uppsala Schmidt telescope at Siding Spring Observatory in Australia.

Researchers estimate that the space rock is between 1,000 and 2,300 feet wide (300-700 m). This evening, it will come within about 3.35 million miles (5.4 million kilometers) of our planet, or roughly 14 times the distance between Earth and the moon.

Astronomers have identified roughly 9,000 near-Earth asteroids, but they think many more are out there.

"We will most certainly find more as NASA, along with other space agencies and astronomers, are on a constant look-out," Berman said in a statement.