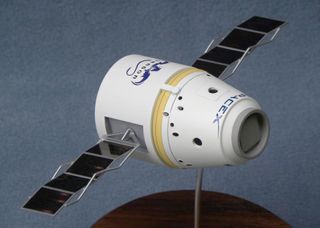 As the first commercial spacecraft to fly to the International Space Station prepares to return to Earth, the company behind the history-making capsule has made it possible for its fans to land their own Dragon.

The California-based Space Exploration Technologies, or SpaceX, has licensed Canada-based Proach Models to create the first commercially-available models of Dragon spacecraft and Falcon rockets. The first of its kind deal was launched within hours of SpaceX seeing its Dragon spacecraft successfully attached to the complex on May 25.

Less than a week later, after having been unpacked of its cargo and repacked with return items, the real Dragon is ready to depart the outpost, re-enter the atmosphere and splashdown in the Pacific Ocean off the west coast of the United States on Thursday (May 31).

Dragon enthusiasts will need to wait a bit longer for the replicas to touchdown on their doorstep. Proach Models is now accepting pre-orders for the newly-announced models with first delivery expected in approximately three months. [Dragon Capsule's Space Station Arrival (Pictures)]

The Proach Models' line of SpaceX displays, which build upon the company's line of spacecraft and rocket models first introduced in 1994, includes both the capsule and its launch vehicle, as well other versions of SpaceX's rockets.

The model capsule includes thruster details and both the SpaceX and Dragon logos.

Proach is offering the hand-crafted and finished spacecraft for a special introductory price of $395.

If rockets are more to your liking, Proach is also offering a 1/72 scale model of the 18-story tall Falcon 9 that stands over 2 feet tall (0.6 meters) and is topped with a small Dragon (3 inches, or 8 centimeters). The Falcon comes with a black walnut base and a nameplate.

These are the same replicas that Proach Models has been crafting for SpaceX for the company's use since 2009.

"SpaceX is a great company to work with and we are very happy for their success," Nick Proach, Proach Models CEO, said. "We look forward to working more closely with SpaceX as they continue to lead the way in commercial spaceflight."

Proach is also offering a Falcon 9 with a scale version of a 17-foot (5 m) fairing for satellite launches, and the Falcon Heavy, the company's heavy-lift rocket. All the models are available in 1/72 scale and measure between 26 and 30 inches tall (66 and 76 cm), depending on the version.

The Proach Models' line of SpaceX replicas is ready for display out of the box.

SpaceX earlier introduced its own model of the Falcon 9 with Dragon that requires some assembly, and can then blast off on its own scaled space (or at least atmospheric) missions.

First offered in celebration of the one-year anniversary of its first Dragon test flight in 2010, SpaceX released a 1:88 flying model rocket replicating its history-making vehicles.

The model kit, which comes with everything you need to build (but not fly, model rocket engines not included) the Dragon-topped Falcon, stands 23 inches tall (58 cm). The kit can be ordered through Amazon.com for $30 (although is currently listed as out of stock).

Click through to collectSPACE.com to see more photos of the Proach Models’ line of SpaceX-licensed spacecraft and rocket models.

This story was updated to correct the metric height of the 1/72 scale Falcon 9 rocket model by Proach Models. The model is over 2 feet (0.6 meters) tall.