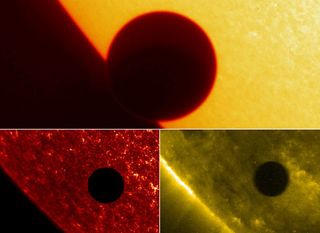 Three views of Venus' solar transit in 2004, taken by NASA's sun-observing TRACE spacecraft. The top image is in visible light; the view on bottom left is in the ultraviolet, and the one on bottom right is in the extreme ultraviolet.
(Image: © NASA/LMSAL )

On June 5, the planet Venus will appear to cross in front of the disk of the sun, appearing as a small black dot. The historic skywatching event, called a transit of Venus by astronomers, is among the rarest of predictable phenomena and one that has amazed scientists and observers throughout history.

Venus transits occur like clockwork, appearing in pairs eight years apart, either in June or December. On this scheduled, a pair of December transits follows a June pair after 105 1/2 years. A June pair will come 121 1/2 years after a December pair. As seen from Earth, only transits of Mercury and Venus are possible.

Transits of Venus and Mercury hold an interesting place in astronomical history. The main reason is the slightly different times that the events occur as seen from different locations on the surface of the Earth. The diameter of our planet is appreciable when compared to the distance to Mercury and Venus, allowing astronomers to triangulate on the planets from various points on Earth when they are seen against a bright background as the surface of the sun.

In this way the difference between the distances of the planet and the sun can be found. Because of its considerably larger size, Venus is better for this purpose, and in fact, during the 18th and 19th centuries those rare transits of Venus provided astronomers with the best opportunity for measuring the absolute scale of the solar system from Kepler's third law. Such a value was poorly known at that time. Edmund Halley — he of the comet fame — was the first to realize that transits could be used to measure the Earth's distance from the sun, a distance called the "astronomical unit." [Gallery: Transits of Venus Throughout History]

Today, this method has been superseded, chiefly because those moments when either Mercury or Venus begins moving onto or off of the sun require precise accuracy, which more than two centuries ago was always difficult to attain.

Since 1882, transit observations — and all the old methods of determining the astronomical unit — have been hopelessly outmoded by modern techniques. Tracking of interplanetary spacecraft, and especially radar ranging to the inner planets, finally achieved the precision sought by astronomers for so long. Indeed, the upcoming Venus transit will be looked upon as merely a chance to view a rare and striking event.

Nonetheless, elaborate expeditions that were mounted to observe the transits of Venus in 1761 and 1769 provided astronomers with their first good value for the distance of the Earth to the sun (called an astronomical unit).

Kepler had predicted that a transit of Venus would take place on Dec. 6, 1631, but, unfortunately, a large wind and rainstorm obscured the sun across most of Europe, preventing any observations.

An obscure young English astronomer, Jeremiah Horrocks, scrutinized Kepler's tables and came to the conclusion that another transit of Venus was to occur on Dec. 4,1639. Horrocks was ready for the big event, carefully examining the sun even the day before — just in case he erred in his calculations. On Dec. 4 (a Sunday), under scattered-to-broken cloud cover, Horrocks was at his telescope from sunrise until 1 o'clock, at which point he interrupted his vigil by "business of the highest importance" — conducting divine services at his church.

A couple of hours later, Horrocks resumed his watch … and saw the silhouette of Venus on the sun's disk. Sadly, the all-important moment of the entrance of Venus moving onto the sun's disk (ingress) was missed. A circumstance that astronomer Simon Newcomb (1835-1909) would note that "... science has mourned for a century past, and will have reason to mourn for a century to come." [2012 Venus Transit Observer's Guide (Infographic)]

Only one other person saw this transit: Horrock's friend William Crabtree, who was so knocked for a loop by the sight of Venus superimposed on the sun that he completely lost his composure and could make only a few quick sketches just before the sun set. Horrocks and Crabtree planned to meet to compare their observations, but the day before their meeting Horrocks died. He was just 22 years old. And Crabtree would die just three years later.

The June 6, 1761, transit was observed from 120 locations around the Earth. Astronomer Charles Mason (1730-1787) and his assistant, surveyor Jeremiah Dixon (1733-1779), originally planned to travel to far-off Sumatra (in modern Indonesia) to observe it. But upon leaving Portsmouth, England, their ship was fired upon by a French frigate, heavily damaging the vessel and killing 11 on board.

As a result, Mason decided against observing the transit, but received a harsh reprimand from the British government, which urged him to try again. So Mason and Dixon set sail in February 1761.

Two months later, they arrived at the Cape of Good Hope in South Africa. When they received word that the French had just occupied Sumatra, they decided to observe the transit from the cape. As it turned out, it was the only successful observation made from the Southern Hemisphere. Two years later, Mason and Dixon signed an agreement with the proprietors of Pennsylvania and Maryland to assist in resolving a boundary dispute between the two provinces, finally delineating what was to become famously known as the Mason-Dixon Line, in 1766. [2004 Venus Transit: 51 Amazing Photos]

A Frenchman commonly known by the name of Le Gentil (full name: Guillaume-Joseph-Hyacinthe-Jean-Baptiste Gentil de la Galaisière!) departed France more than a year in advance of the 1761 transit, and headed for Pondicherry, India. First he survived a hurricane and a bout of dysentery, and then Pondicherry was captured by the British (it was at the height of the Seven Years' War between England and France).

As such, Le Gentil was prevented from landing in India and was forced to watch the transit out at sea from the deck of a rolling ship, making his observations practically useless. Ultimately, he ended up on the island of Mauritius.

Passionately fond of astronomy, Le Gentil made the decision to make Mauritius his home base for the next eight years to await the Venus transit of June 1769. He spent those eight years exploring the geography and history of the Indian Ocean. Ultimately, he decided to observe the transit from Manila, but was then instructed by his sponsor, the Academy of Sciences in Paris, to go to Pondicherry instead.

The weather is usually superb at Pondicherry in June, but on the day of the transit, a "vexatious cloud" covered the sun, preventing Le Gentil from observing the transit. Worse yet, he was later exasperated to learn that in Manila, the sky was crystal clear.

Sadly, Le Gentil decided to return to Paris. But along the way he suffered through two shipwrecks and when he finally arrived in France, he discovered that he was presumed to be dead by his heirs, who were busily dividing up his estate.

Captain James Cook (1728-1779), called by some "The Great Ocean's greatest explorer," observed the 1769 transit from the black sand beach now called Venus Point, northeast of Papeete, on the island of Tahiti. Cook was specifically chosen because he was among the very few who knew how to work out longitude. During the voyage, he opened his secondary secret orders, which revealed he was to search for "Terra Australis Incognita," the unknown southern land (known to us as Australia) and claim it for Britain.

A look to the future

The next transit was Dec. 9, 1874, followed by one on Dec. 6, 1882. These were observed from as many parts of the Earth as astronomers could get to. An American expedition saw the 1882 transit from South Africa. Simon Newcomb was stationed near the town of Wellington, observing under perfect conditions. In his memoirs he later wrote:

"On our departure we left two iron pillars, on which our apparatus for photographing the sun was mounted, firmly imbedded in the ground, as we had used them. Whether they will remain there until the transit of 2004, I do not know, but cannot help entertaining a sentimental wish that, when the time of that transit arrives, the phenomenon will be observed from the same station, and the pillars be found in such a condition that they can again be used."

Newcomb's wish unfortunately could not be fulfilled because the two iron pillars have since disappeared.

And William Harkness (1837-1903), then director of the U.S. Naval Observatory, wrote these prophetic words on the eve of the 1882 transit:

"There will be no other transits of Venus till the twenty-first century of our era has dawned upon the earth. When the last transit occurred the intellectual world was awakening from the slumber of ages, and that wondrous scientific activity, which has led to our present advanced knowledge, was just beginning. What will be the state of science when the next transit season arrives God only knows. Not even our children's children will live to take part in the astronomy of that day."

So as you watch Venus rapidly descending into the sunset twilight in the days ahead, be sure to think of the imminent transit of June 5.