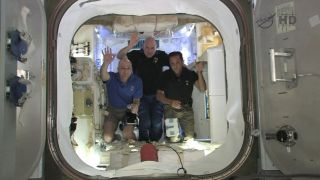 HOUSTON — The arrival of the first commercial spacecraft at the International Space Station this week is tantamount to the golden spike that completed the first railroad to span the United States 143 years ago this month, an astronaut on the orbiting lab said Saturday (May 26).

"We all remember the completion of the transcontinental railroad, which opened up the western frontier of the United States and it was celebrated by pounding in a golden spike," NASA astronaut Don Pettit radioed from inside the privately-built Dragon spacecraft. "This is sort of the equivalent of the golden spike."

The robotic Dragon space capsule, which was designed by Hawthorne, Calif.-based Space Exploration Technologies (SpaceX) was captured via robotic arm by Pettit and attached to the space station on Friday (May 25). Today, Pettit opened the hatch to the cargo craft and was the first to go inside.

"One other interesting detail, nobody remembers who pounded that golden spike in. The important thing to remember was that the railroad was completed and was now open for use to help settle the western frontier," Pettit added. [SpaceX's Dragon Arrives at Space Station (Pictures)]

This test flight, conducted under NASA's Commercial Orbital Transportation (COTS) program, is paving the way for a change in how the space agency launches cargo and, eventually, astronauts to the space station.  SpaceX, headed by PayPal co-founder Elon Musk, has a $1.6 billion contract with NASA to provide 12 Dragon cargo ship flights to the station, not counting this test flight.

"You made history today and have firmly locked into place the future direction of America's space program," NASA Administrator Charles Bolden told the Pettit and his crewmates during a call to the space station on Friday.

Room for three (or more)

Pettit, together with fellow NASA astronaut Joe Acaba and European Space Agency (ESA) astronaut Andre Kuipers, entered the newly-opened Dragon spacecraft on Saturday to answer questions from media on the ground. The three were shown floating inside with room to spare.

"I spent quite a bit of time poking around in here this morning, just looking at the engineering and the layout, and I’m very pleased,” Pettit told SPACE.com. "It looks like it carries about as much cargo as I could put in my pickup truck and it's roomier than a Soyuz."

With the end of the space shuttle program last year, NASA now relies solely on Russia’s three-person Soyuz capsules to ferry astronauts to and from the space station. The U.S. space agency is looking to hire the services of commercial companies, including possibly SpaceX, to domestically fulfill that need.

"I think we would feel very comfortable in a human-rated vehicle just like this one,” Acaba said.

Pettit said that all six crew members aboard the space station had already been inside the Dragon together, but with about 1,000 pounds of cargo still packed aboard Dragon, it was just enough space.

"There's not enough room in here to hold a barn dance, but for transportation of crew up and down through Earth’s atmosphere and into space, which is a rather short period of time there’s plenty of room in here for the envisioned crews," Pettit said.

With the hatch now opened, Pettit, Kuipers and Acaba were expected to take about 25 hours spread over the next few days to unpack the Dragon of its student science experiments and crew rations and then re-pack it with experiment results and unneeded equipment for the trip back to Earth.

The Dragon is slated to splash down in the Pacific Ocean off the coast of San Francisco on May 31.

Among the items to be unpacked are "crew choice" packages, which include personal items for the astronauts, though the contents are still a surprise.

"We heard that there might be a little crew care package in here with some goodies in it and we don’t know what they are going to be," Pettit said. "It is kind of fun to keep those as a surprise just ‘cause it is nice to get a surprise once in a while from Mother Earth."