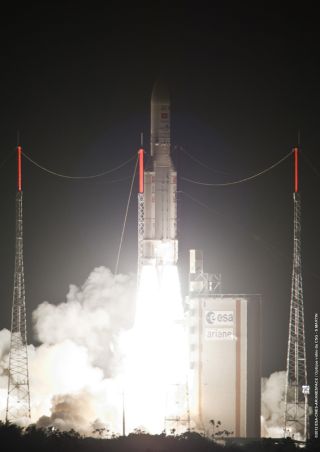 An Arianespace Ariane 5 rocket launches into space on May 15, 2012 from Guiana Space Center in Kourou, French Guiana. The rocket carried the JCSAT-13 and VINASAT-2 communications satellites into orbit.
(Image: © Arianespace)

PARIS — Europe’s Ariane 5 rocket on May 15 successfully placed two telecommunications satellites into orbit for Japanese and Vietnamese customers in the second of seven Ariane 5 missions planned for 2012.

Sunnyvale, Calif.-based Lockheed Martin Space Systems reported that both satellites were in good health in orbit after separation from the Ariane 5-ECA rocket’s upper stage.

Vinasat-2 is owned by the Vietnam Posts and Telecommunications Group, a relatively new entrant in the global satellite telecommunications marketplace. It weighed 2,969 kilograms at launch and carries 24 Ku-band transponders.

Vinasat-2 will operate from 131.8 degrees east, next door to the Vinasat-1 spacecraft launched in April 2008. Vinasat-1 filled its capacity of 12 Ku- and eight C-band transponders more quickly than expected, causing the Vietnamese government to order a follow-on spacecraft.

Vinasat-1 was also built by Lockheed Martin, a company whose most regular commercial satellite successes have been in the Japanese market with SkyPerfect JSat.

Building 101 commercial satellites since 1975 means an average delivery rate of nearly three satellites per year — a rhythm that is far greater than Lockheed Martin’s performance over the past decade and illustrates how active the company once was in the market.

U.S. Department of Defense demand for satellites is now leveling off, with few major new starts on satellite infrastructure expected in the near future as U.S. defense authorities manage a tighter budget regime.

Like Boeing Space and Intelligence Systems of El Segundo, Calif., Lockheed Martin has indicated it will be paying more attention to the global commercial satellite business now that the U.S. defense market is no longer growing.

The May 15 launch was the 48th consecutive success for the Ariane 5 vehicle, operated by the Arianespace consortium of Evry, France.