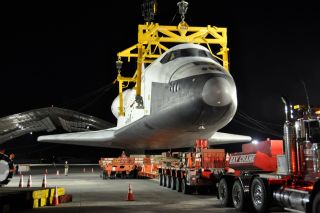 Enterprise, NASA’s original prototype space shuttle, is lowered by crane onto a wheeled transporter at John F. Kennedy (JFK) International Airport in New York on May 13. The shuttle was removed from the top of the modified Boeing 747 jetliner that delivered it to the Big Apple.
(Image: © Dennis Jenkins via collectSPACE.com)

Two weeks after flying into John F. Kennedy (JFK) International Airport mounted atop a modified Boeing 747, Enterprise — NASA's original prototype space shuttle — was off-loaded by crane from the back of the jumbo jet to the ground overnight on Saturday (May 13).

Workers finished hoisting Enterprise off the Shuttle Carrier Aircraft (SCA) at about 6:30 a.m. EDT (1030 GMT) Sunday. The orbiter, which did not fly in space but was used for a series of approach and landing tests in the late 1970s, was lowered onto a wheeled transporter and then moved to a hangar to wait being barged to the Intrepid Sea, Air & Space Museum for public display.

Enterprise's three-day journey on the Hudson River to the Intrepid, a converted World War II aircraft carrier in Manhattan, is set to begin on June 4.

Enterprise touched down in New York from Virginia, where it has been on display at the Smithsonian National Air and Space Museum since 2003, on April 27. Still attached to the 747, Enterprise was parked at JFK under an open-ended hangar. NASA then moved and set-up at the New York airport the same two large cranes used to mount the orbiter atop the jetliner for its ferry flight to the Big Apple.

All of NASA's space-flown space shuttles and Enterprise are getting new museum homes after the space agency retired the orbiter fleet in 2011. The shuttle Discovery replaced Enterprise at the Smithsonian on April 19.

United Space Alliance (USA) workers will begin dismantling the cranes at JFK on Monday. The 747 Shuttle Carrier Aircraft is expected to depart for NASA's Dryden Flight Research Center in California by the end of the week. In September, it will fly to the Kennedy Space Center in Florida for its final space shuttle ferry flight, carrying the shuttle Endeavour to Los Angeles for the California Science Center.

The only space shuttle not to ride a carrier aircraft to its final museum home is Atlantis, which will be moved by land from the Kennedy Space Center to the nearby its nearby visitor complex in Florida.

Enterprise's river journey to the Intrepid will include a stopover in Bayonne, NJ to be moved onto a crane-equipped barge. Once alongside the ship-based museum, the shuttle be hoisted onto the flight deck. A climate-controlled temporary steel and fabric structure will then be erected over the shuttle.

The Intrepid's "Space Pavilion" is set to open to the public on Thursday, July 19. The first tickets to view Enterprise went on sale earlier this month.