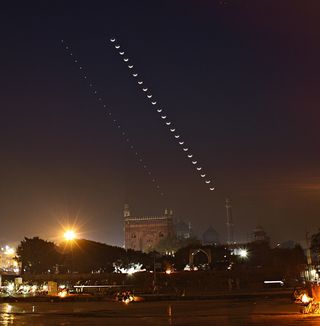 The moon and Venus set over an iconic monument in Delhi in this skywatcher’s photo.

Skywatcher Ajay Talwar of The World At Night shot this celestial pair setting over Jama Masjid or the mosque of Jahan-Numa (meaning “the world-reflecting” in Persian) Jan. 26, 2012 . The mosque was built in the 1650s by the emperor Shah Jahan, who was also behind the Taj Mahal.

Venus and the moon both appear to glow above the monument in the spectacular image. Venus, about 27.8 million miles from Earth, is one of the brightest planets in our night sky. This blazing hot planet has a high reflective quality, called albedo, which makes it shine in the sky. [Photos: Venus and Crescent Moon in April 2012]