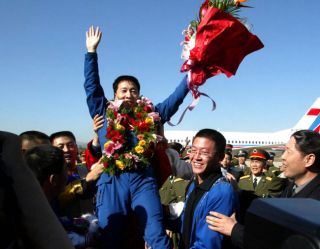 China's first astronaut Yang Liwei is greeted by officials upon his arrival in Beijing Thursday Oct. 16, 2003. Fresh from a history-making trip into orbit, China's newly minted space hero proclaimed his amazement Thursday at "the greatest day of my life" as his leaders announced they would push forward in their exploration of the cosmos. (AP Photo/Xinhua Photo, Zhao Jianwei)

The movie aims to raisefunds for needy children in China and is set to open during the Lunar New Year,the Oriental Daily reported.

Yang, who acquired nationalcelebrity status after becoming China's first man in space in October 2003, hasexpressed interest in raising money for the cause and is currently negotiatingdetails with the filmmakers, the report said.

Both Tsui and his wife,fellow filmmaker Nansun Shi, were not in Hong Kong and could not be reached toconfirm the report, a woman who answered the phone at Tsui's company said.