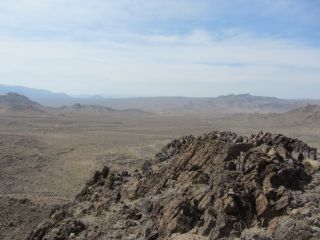 Geologists have been coming to Death Valley for decades, studying the many layers of ancient yet accessible rock to piece together Earth's complex history.
(Image: © Mike Wall/SPACE.com)

DEATH VALLEY, Calif. — Death Valley isn't a perfect stand-in for Mars — it's too hot here, for starters — but it's a great place to learn what NASA's new Curiosity rover will be doing once it arrives on the Red Planet in a few months.

The Curiosity rover is basically a huge robot geologist, and Death Valley is a geologist's dream landscape. Researchers have been coming here for decades, studying the desert's many ancient yet accessible rock layers to tease out Earth's complex and convoluted history.

One of these researchers is Caltech's John Grotzinger, who also happens to be the Curiosity mission's lead scientist. Grotzinger came out to Death Valley Monday and Tuesday (April 30 and May 1) to give a gaggle of journalists an inside look at how the 1-ton rover will go about its business.

A desert stand-in for Mars

Curiosity, the centerpiece of NASA's $2.5 billion Mars Science Laboratory (MSL) mission, launched in November and is due to touch down at the Red Planet's Gale Crater on the night of  Aug. 5. The rover's main task is to assess whether the Gale Crater area is, or ever was, capable of supporting microbial life. [Photos: Curiosity's Gale Crater on Mars]

To get at this question, Curiosity will take a variety of geological and geochemical measurements with its 10 science instruments. The MSL team will analyze this information in an effort to understand the evolution of Gale and Mount Sharp, the mysterious 3-mile-high (5 kilometers) mound rising from the crater's center.

Such detective work can be difficult enough for teams of human scientists here on Earth, so Curiosity has a big challenge ahead of it, Grotzinger said. But at least there are no plate tectonics on Mars to throw the rock layers into a confusing jumble, as has happened here in  Death Valley and many other places on our planet.

"The cool thing about Gale is, a lot of what we get is just laid out flat for us to go study," Grotzinger said.

On Monday and Tuesday, Grotzinger took the nine or so journalists with him to various sites throughout Death Valley. At each stop, he explained a bit more of the field geologist's craft, discussing how researchers read rocks to interpret the history and interplay of different layers.

We even tried our hand at this ourselves. Like Geology 101 students on a field trip, we bashed the banded rock apart with hammers, studied the exposed grains and sketched an outcrop's stratigraphy in our field notebooks.

There's a lot of information hidden in those layers, and in those grains. Grotzinger explained that fine-grained rock likely formed in calmer, deeper water, while large-grained stones are indicative of a shallower, more turbulent aqueous environment.

He pointed out a band of rock on a faraway mountain that marked the boundary of the Cambrian period — the time, about 540 million years ago, when macroscopic, multicellular life on Earth exploded into a huge variety of forms.

And Grotzinger took us to another site, near an old abandoned talc mine. Just upslope from a huge mound of chalky white rock, he showed us an outcrop bristling with fossilized stromatolites at least 1 billion years old.

Stromatolites are structures created by sticky, sediment-trapping microbial mats. They grow, layer by layer, as the microbes reproduce and snag more sand and dirt. Observing such structures on Mars would be an intriguing but inconclusive sign of Red Planet life, since abiotic processes also can produce stromatolite-like objects.

"These are some of the best stromatolites you'll see in western North America," Grotzinger said. "If we ever found anything like this with MSL, we would stop and study it. And it might be a really good place to come back and do sample-return."