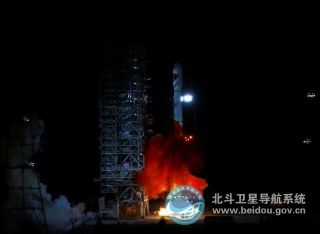 Sunday's launch marked the first time China orbited two Beidou satellites on the same rocket. Chinese industry developed a dual-payload adapter to launch the satellites one on top of the other inside the Long March nose fairing.

The Long March 3B launcher lifted off from the Xichang space center  on Monday at 4:50 a.m. Beijing Time (2050 GMT, 4:50 p.m. EDT Sunday), state media reported, and tilted southeast to reach an oval-shaped transfer orbit inclined 55 degrees to the equator.

The 18-story liquid-fueled rocket reached an orbit ranging from 150 miles to more than 13,000 miles above Earth. Each satellite will use its on-board propulsion system to circularize its orbit at an altitude of about 21,500 kilometers, or 13,359 miles.

It was the first time China launched a dual-satellite primary payload into a high-altitude orbit, according to the China Academy of Launch Vehicle Technology, the state-owned contractor for the Long March rocket family.

Now in operational testing for users across China, the Beidou satellite system will provide global coverage with a constellation of 35 satellites by 2020, according to Chinese officials.

China activated the Beidou network in December on a trial basis. Its 11 operational satellites currently provide services over the Asia-Pacific region, including most of China. The coverage zone stretches from the southern border of Russia to Australia, and from India in the west to the Pacific Ocean in the east.

The system has been used in transportation, weather forecasting, marine fisheries, hydrological monitoring, and mapping, according to the state-run Xinhua news agency.

The best service will be available to Chinese military and civil government users. Positioning information with an accuracy of 10 meters, or about 33 feet, will be released to the public worldwide.

Sunday's flight was the fifth Chinese space launch of the year.