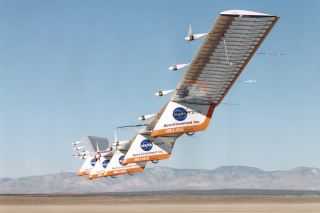 In this historical photo from the U.S. space agency, the Helios Prototype is an enlarged version of the Centurion flying wing, which flew a series of test flights at Dryden in late 1998. The craft, pictured Nov. 1, 1999, has a wingspan of 247 feet — longer than either the Boeing 747 jetliner or Lockheed C-5 transport aircraft.

Developed by AeroVironment, Inc., of Monrovia, Calif., the unique craft is intended to demonstrate two key missions: the ability to reach and sustain horizontal flight at 100,000 feet altitude on a single-day flight, and to maintain flight above 50,000 feet altitude for at least four days, both on electrical power derived from non-polluting solar energy.

During later flights, AeroVironment's flight test team will evaluate new motor-control software which may allow the pitch of the aircraft (the nose-up or nose-down attitude in relation to the horizon) to be controlled entirely by the motors. If successful, production versions of the Helios could eliminate the elevators on the wing's trailing edge now used for pitch control, saving weight and increasing the area of the wing available for installation of solar cells.