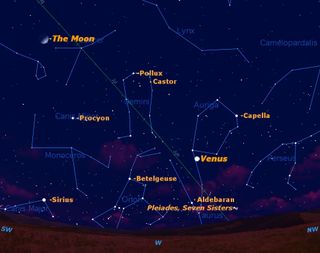 This week an hour after sunset, the western sky is dominated by the brilliant planet Venus plus a bevy of first magnitude stars.
(Image: © Starry Night Software)

Step outside any night this week about an hour after sunset and have a look at the western sky. The first thing that will catch your eye is the brilliant planet Venus.

Look a little more closely and you'll see that Venus is surrounded by bright stars. The sky map accompanying this story will help you identify them.

Although Venus is always one of the brightest objects in the sky, this week it is at its very brightest. That's because of a combination of circumstances.

The solar system's two innermost planets, Mercury and Venus, go through a series of phases similar to the moon, as they are lit from the side at different angles by the sun. Their apparent size also changes as they move from the far side of the sun to the near side.

Currently Venus is moving toward the Earth, so it is getting larger and brighter. Its phase is also narrowing as it moves in front of the sun, which makes it decrease in brightness. So we've got two opposing forces in action: Getting closer means getting brighter, and a narrowing crescent means getting fainter. This week the two balance out to make Venus as bright as it can possibly be. [Photos: Venus and Crescent Moon in April 2012]

Through a telescope this week, Venus will look like a miniature version of a five-day-old moon, except without any mountains, lava seas or craters. The view of Venus through a telescope is often disappointing and surprising; it doesn't seem like something so beautiful to the naked eye should be so bland when magnified.

Despite Venus' somewhat boring appearance, there is a lot going on beneath the planet's clouds. Its dense atmosphere and proximity to the sun make for an exaggerated greenhouse effect. The surface temperature on Venus is a hellish 860 degrees Fahrenheit (460 degrees Celsius). By way of comparison, the melting point of lead is 621 F (327 C).

Over the next few weeks, Venus will continue to approach the Earth, getting larger in size as its crescent continues to narrow. Even if you don't have a telescope, take a look at Venus with binoculars. Soon you will see it as a tiny crescent.

On June 5 (June 6 in Australia and Asia), something very special will happen: Venus will pass between the Earth and the sun, appearing as a black dot silhouetted against the sun. This event — known as a transit of Venus — happens on average only twice a century, and this will be the last chance to see such an event for the rest of your life. It won’t happen again until the year 2117.