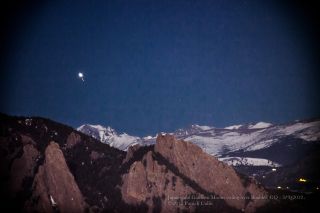 Jupiter and several of its moons hang over snowcapped Colorado peaks in this photo snapped by skywatcher Patrick Cullis on March 9, 2012.
(Image: © Patrick Cullis)

Jupiter will end its brilliant year-long show on Sunday evening (April 22) by making a rendezvous with an exceedingly thin and very young crescent moon.

Indeed, the moon itself will appear so thin and low that it may be rather hard to detect in the sun’s afterglow. Jupiter will be even lower, appearing to sit about 3 degrees directly below the slender lunar sliver. (Your closed fist held at arm's length measures roughly 10 degrees across.)

The moon will be just 36 hours past its new phase, and will thus be just 2 percent illuminated. The moon and Jupiter will be setting about 1 1/2 hours after sunset on Sunday. The Jupiter sky map associated with this guide shows where to look Sunday to see the planet after sunset.

To enhance your chances of getting a good look at both the moon and the planet, make sure that your prospective viewing site has a very clear and unobstructed view toward the west-northwest part of the sky.

Thirty minutes after sunset, the moon will be no higher than 10 degrees above the horizon. And Jupiter, which will be nothing more than a bright, white dot against the twilight background, will lurk nearby, appearing just 3 degrees lower.

You can accentuate your chances of picking up both heavenly bodies by scanning around that part of the sky with a decent pair of binoculars or a small telescope. Once you sight them, getting a glimpse of the pair with your unaided eyes should be a bit easier.

After Sunday, you can pretty much say goodbye to Jupiter as an evening object, as it will be swallowed up by the sunset glow. The planet will be in conjunction with the sun on May 13 and will not reappear again until sometime in early June, when it will transition to the early morning sky.

However, the giant planet is destined to put on a nice showing in the predawn sky during early summer, being nicely positioned near the bright orange star Aldebaran in the constellation Taurus (The Bull). And by then Venus will also have moved into the morning sky and will be nearby, making for an attractive celestial scene.

So for Jupiter, this is not goodbye but rather, "till we meet again this summer."